The Rarest Plant I Have Ever Seen?

Today was a huge day. Dave Gibbs and Alan Lewis are up on Skye for a few days and have asked me to help them see a few choice target plants. Highest on their list is Alpine Rock-cress Arabis alpina, possibly the Holy Grail of high altitude plants on Skye. Closely followed by Iceland-purslane, in my opinion, though the rock-cress is far, far (far!) rarer.

I had of course enlisted the help of a couple of botanical heavyweights, Stephen Bungard the BSBI Recorder for Skye who knew the precise location of The Arabis and, just as importantly, was willing to lead us to it, plus bryologist extraordinaire Nick Hodgetts. What these two men don't know about the plantlife of Skye just isn't worth knowing, it's that simple. Neil was with us too, he's just damned good fun to be around and has more energy than the rest of us put together.

The Arabis, as it is generally known to discerning botanists, occurs in precisely four isolated spots in The Cuillins, a jagged spine of mountains in central Skye. Access is on foot, usually from some distance away, and whichever way you look the cliffs and scree slopes stare back at you as though they've noticed an intruder in their midst and are slowly debating what to do about it. There's a definite and distinct sense of foreboding, particularly as you lean on a boulder to catch your breath and stare ever upwards towards peaks lost in cloud. The cliffs make you feel small. The occasional falling rock, crash-bouncing its way down a scree slope in an echoing clatter is precisely the sort of thing that helps create an underlying sense of unease. We'd passed the Fairy Pools with associated daytripping tourists, now we were entering troll country and they seemed mischievious to my mind. 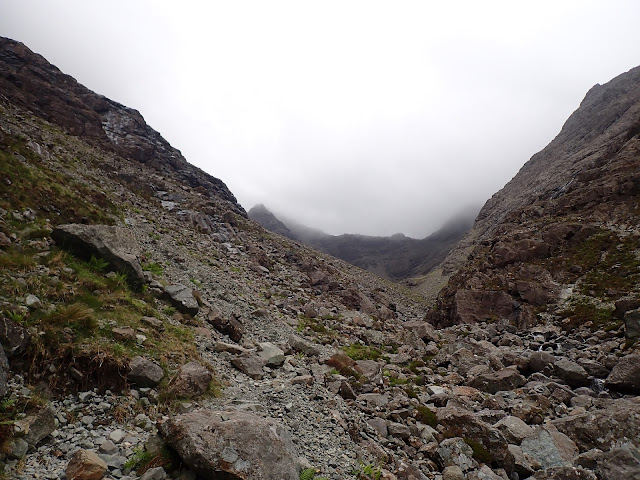 Apart from the obvious risk of troll attack, this was a actually a very nice part of the world to explore. Alan is very into his bryophytes and he spent a lot of time poring over tiny green scuzz with Nick. As is usual, I soon found myself caught up in it all and was handed various tiny sprigs of greenery to examine with my handlens. I find bryophytes very difficult to get to grips with. In fact, I haven't gotten to grips with them at all! I can do a very select few, but Nick confidently names almost everything by eye and never ever forgets the name. Ever. Beneath a handens they are transformed, to realise that the square centimetre of greenery you're looking at consists of three or four different species, and then to have Nick name all six in it is just boggling. I think I'm happier just admiring them rather than trying and failing to name them, but somehow some of it has actually sunk in.

Wending our way ever uphill, we kept an eye open for montane plants. The Cuillins are relatively species-poor, Stephen said he'd only ever recorded a little over 100 species in this area, but that didn't mean we didn't find anything of interest.

Neil found a tenanted fly mine in a leaf of Mountain Sorrel. Internet seaches suggest the culprit to be Pegomya solennis, but in truth it could easily be another Pegomya or a different genus altogether. I don't believe the leafmining websites are as comprehensive as they claim to be, I'd need to rear it through. Out of curiosity I chewed a leaf, not as strong a flavour as Common Sorrel but acceptable. Neil also found the best example of Puccinia violae of the day, which is a rust fungus specific to violets. Here's a pic of the underside of the violet leaf blade 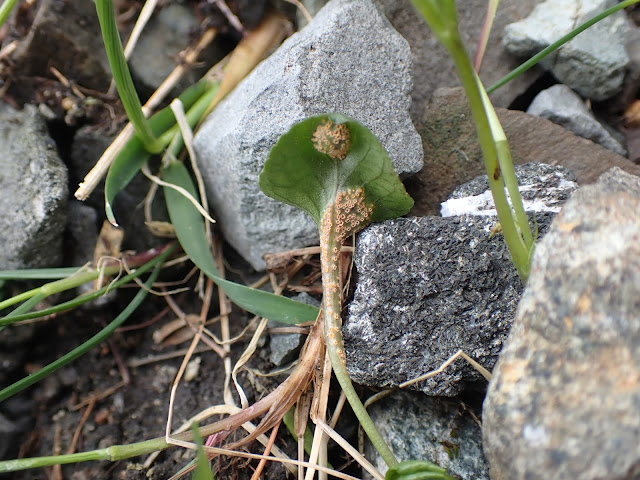 Alpine Lady's-mantle was decidedly abundant on rock ledges and amongst the scree. I found a large clump still bearing last year's dead leaves and stems, which just happens to be the precise substrate for a rare microfungus. Here's the pics, note the raised black dots in the lower pic - they're the fungal fruitbodies. 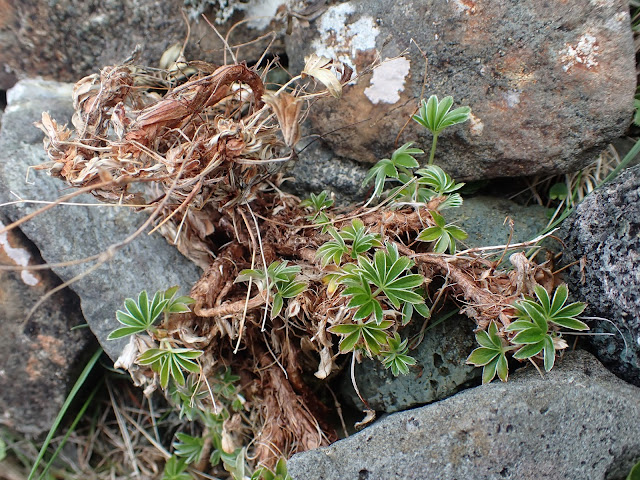 Dave took a bit away with him to examine under the microscope when he was home again. Alan just patted me on the head and walked straight by without stopping, saying he "wasn't that sad". I decided right there and then that my gut instincts were spot on and he was, in fact, a bit of a jerk.

By now we were gaining height and our walk had become a bit of a scramble. I asked Stephen if we were in with a chance of Alpine Saw-wort and he replied that we definitely were and, all of one minute later, called that he had some! Amazingly, I realised that all fatigue had vanished as I sped up the scree to gawp at my first ever Alpine Saw-wort plants. 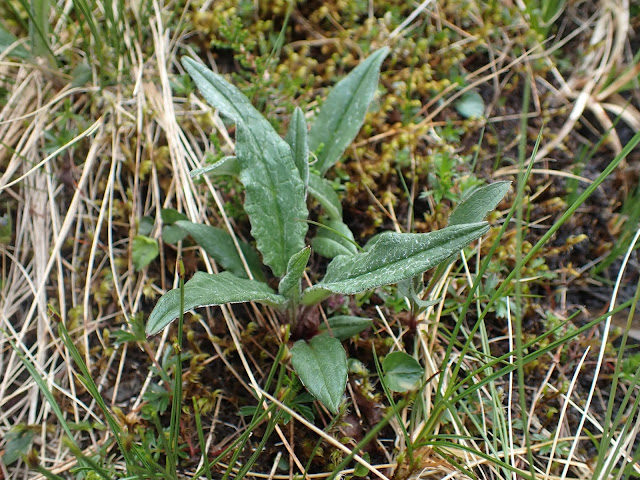 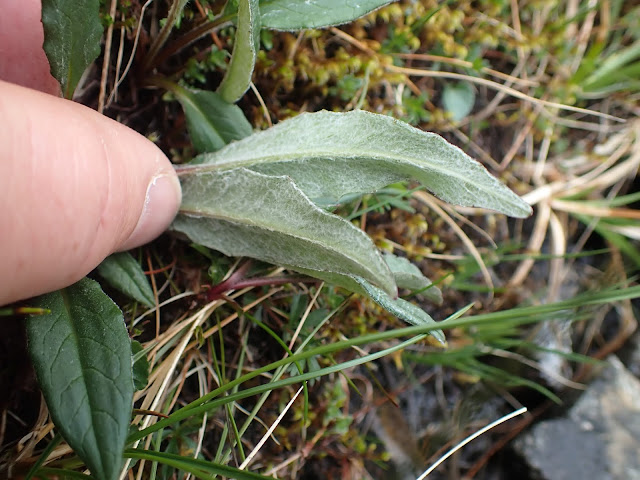 Stephen explained that only a small proportion of  Alpine Saw-wort plants on Skye flower in any given year, and that we were still a bit early for them to be flowering anyway. And then he spotted one in full bud and surely only days away from flowering! 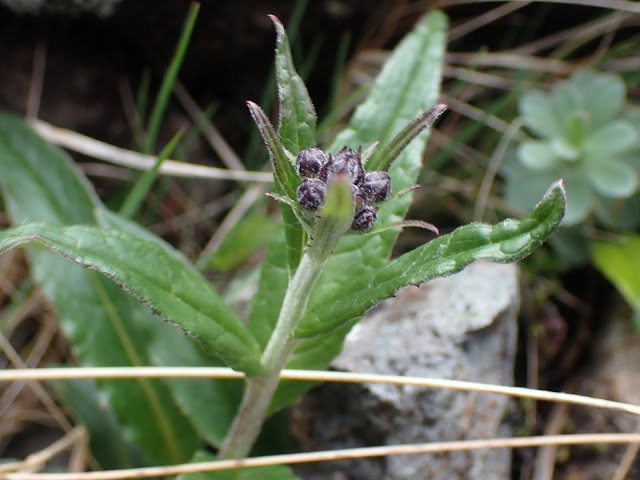 By now we were quite high up the valley and it was becoming quite an effort to make much headway as the terrain became increasingly steep and likely to slip away underfoot.

It took us another hour or so to reach the area just below the skyline, but we arrived in high spirits and headed for the small overhang that The Arabis calls home. Neil and Dave were first ones to arrive, I couldn't hear any shouts of joy, but then I couldn't hear any upset swearing either. What was happening? I finally finished my traverse of the scree slope and found myself peering between heads and shoulders at a surprisingly robust-looking white-flowered plant.

We'd seen quite a bit of Northern Rock-cress on the way up, but this Alpine Rock-cress plant seemed overall more luxuriant and maybe a paler green colour too. Dave and Alan were thrilled that it was in flower and producing seed pods. Not many folks get a chance to view this plant, and some of those that do find they are too early and it's still in bud, or too late and it's gone to seed. We'd timed it pretty much perfectly - happy days!

Stephen made it very clear that this plant was fully protected by law and we were not even allowed to touch it. He seemed pretty serious too. He also told us we were looking at the lowest altitude Alpine Rock-cress in Britain (and then that the highest altitude plant is about twenty metres higher, ha!) There was a thought that Victorian botanists had accidentally carried the seeds of this plant into the mountains on their boots after visiting the mountains of Europe, but no hard evidence exists to prove that. The four known sites all appear to be of native plants, though this colony and the fourth are some distance away from the other two. I actually have no idea how such tiny, isolated populations remain viable.

As he does each time he visits an Alpine Rock-cress site, Stephen counted the basal rosettes (approx 50 in this patch) and took lots of photos of the plant and its immediate surroundings. We were sworn to secrecy regards the exact location of this plant, so if you were hoping to tap me for gen, I'm sorry but that's just not happening. Neil will probably tell you though if you buy him a sweetie. 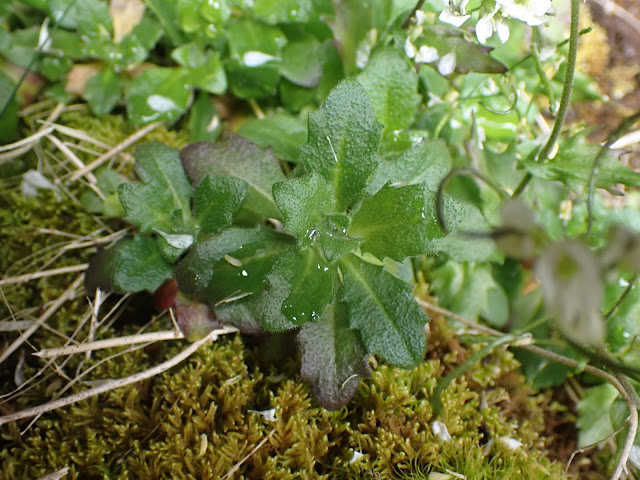 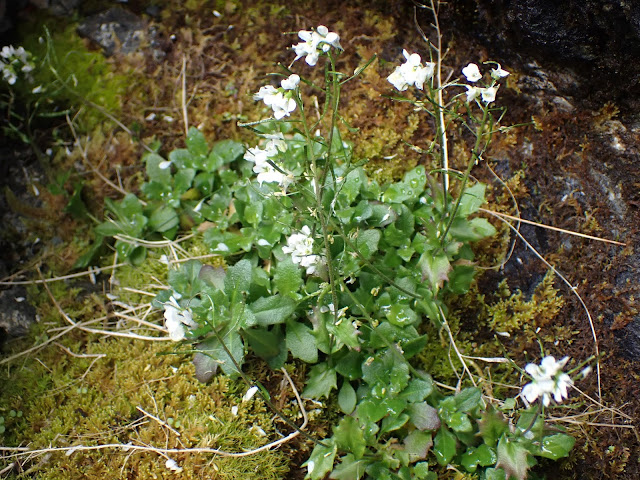 We decided it was time for a lunch stop, I'm not sure how many folks have sat within six foot of this crippling rarity whilst casually swilling Lucozade and wolfing down a veggie pasty, but I certainly did. I almost threw my apple core away, before thinking better of it and eating it whole. I would hate to think future botanists would be confronted with an apple tree up here, and who even knows what the trolls would think of it all.
The descent was long and quite hard work on my knee, which traditionally gives me grief on long downhill slogs. An old war wound, so to speak, but it's not annoying enough to slow me down. All the same, it was a relief to get off the rocks and just walk normally again!

I cannot thank Stephen enough for agreeing to guide us up the mountains to see this amazing rarity. This year I had determined to fill a few gaps in my montane plants list. Beinn Edra last week provided me with Sibbaldia, Three-flowered Rush, Dwarf Willow, Chickweed Willowherb, Dwarf Cudweed, Spiked Wood-rush and Iceland-purslane. Today I have also added Alpine Saw-wort and Alpine Rock-cress. By no means is that a clean sweep of the plants I still need to see, but it's a damned fine start!

Oh, and tomorrow I'm dragging my poor knee up the Old Man of Storr so Dave and Alan can find a few more target plants. I'm going to need some time off after my time off.......