A few months back, local naturalist Neil 'Rockhopper' Roberts found some prominent galls on a dead plant. In a bid to elucidate the identity of the gall causer, he popped some pics of the dead plant up on a FB group and asked for help (plant ID not being his strong point). Sadly, what with the plant being dead, none of us could ID it with any certainty. Although I did point out that I believed it to be a hawkweed..... just remember that bit! Here's Neil's images of the galls as he found them. 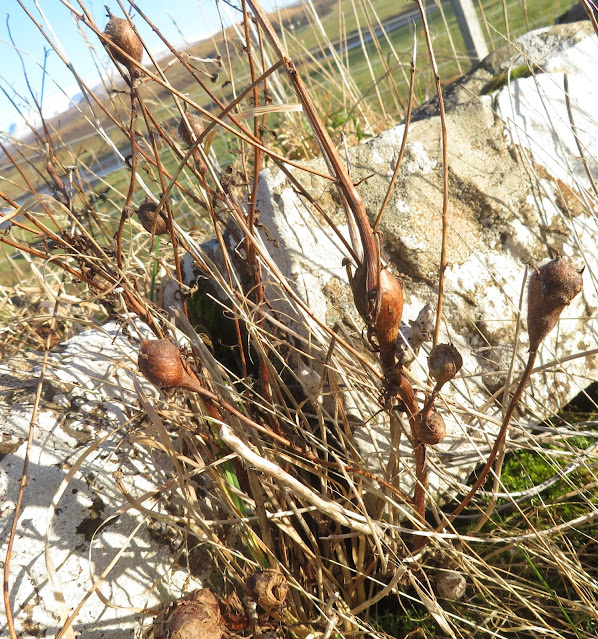 And here's his image of the few he collected, taken when he was back indoors later that day. 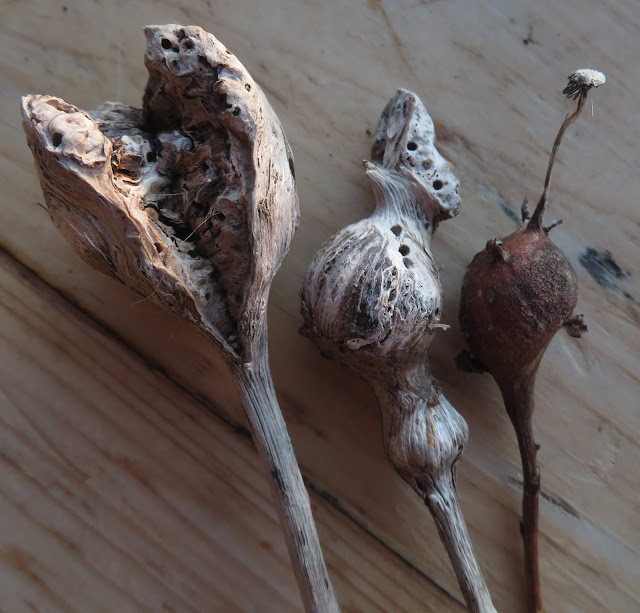 I did a bit of internet searching and came up with a wasp that galls Common Cat's-ear as a possibility. Neil and Stephen didn't like that idea, the mystery plant was too woody for Common Cat's-ear and with hindsight I could only agree with them. Here's a screenshot of the actual thread (apparently it was 19 weeks ago!) 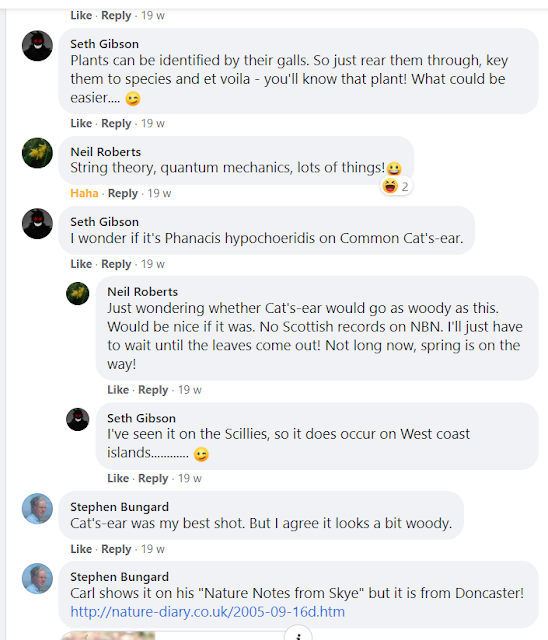 So I continued to scour the internet for clues as to the identity of the galls on Neil's mystery plant. Suddenly I had it. Yep I absolutely definitely had it. Sweet! Sadly nobody else agreed with me, so I stomped off in a huff and quit wasting my time trying to help the disbelievers.... 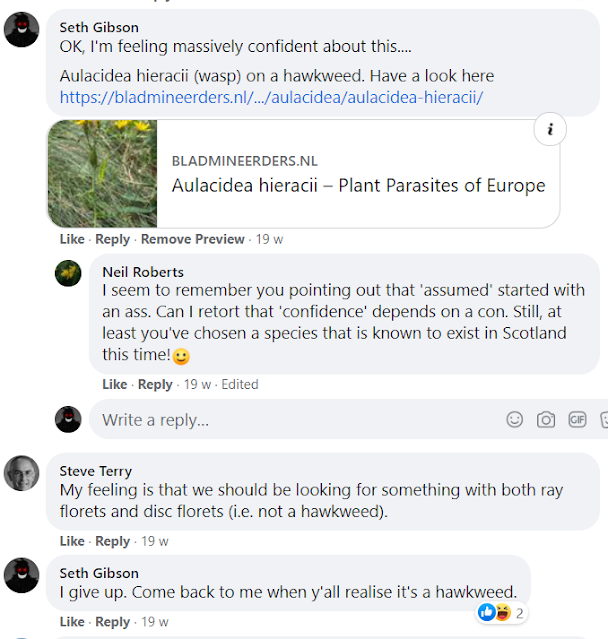 I felt vexed by the galls, I simply had to know the species of plant involved. I was almost certain it was a hawkweed and that the wasps would prove to be Aulacidea hieracii, so I visited the site and grabbed two galls that lacked exit holes. In theory they would be packed full of wasp grubs/pupae and, given a bit of time and luck, the adult wasps would emerge in due course and I'd be able to key them through to species. Which in turn would lead me to the identity of the plant. Or I could just wait for the leaves to develop.

Events transpired to provide the wasps before the leaves. A week ago today, I glanced at the potted galls to discover a veritable horde of wasps stomping up and down the length of the glass tube. Oooh, I'm a daddy! 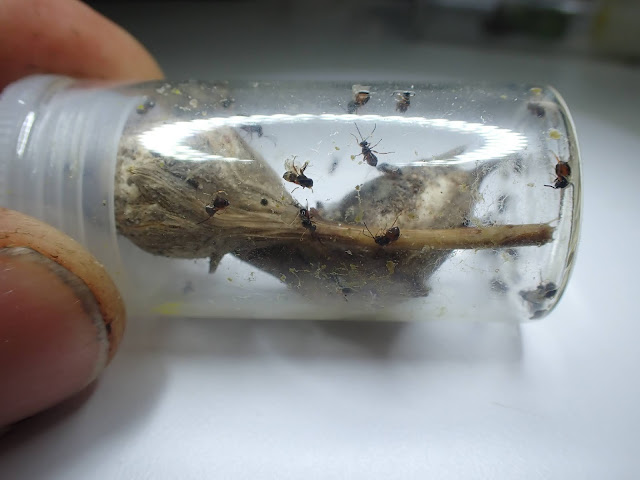 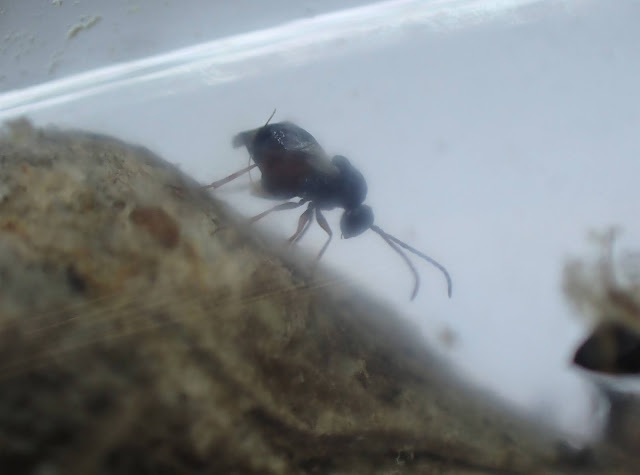 At this stage I just panicked and bunged a dozen or so into alcohol (hoping for both sexes in case the key required features from both) and let the rest escape into the clean air of Uig. 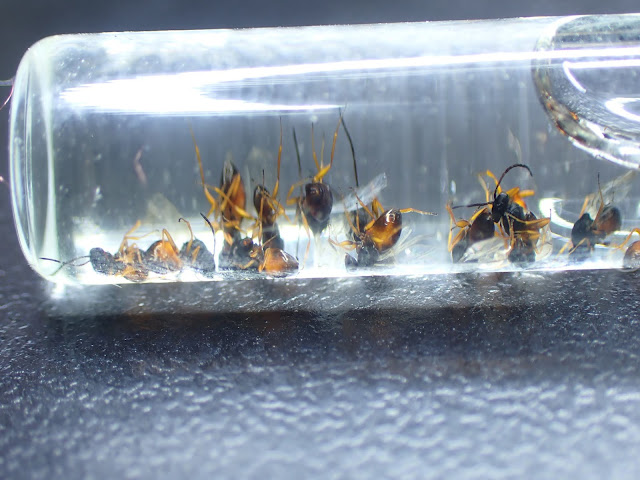 After work today, I headed out with my binoculars intent on finding a Rose-coloured Starling. There's a bit of an epic invasion of these gorgeous birds into Britain at the moment with several being discovered up on Skye this week. I've always fancied finding one tagging along with the Starling flock down at Uig Pier, the only other local site that I believe is ideal are the sheep fields at Eyre. I visited both (finding Starlings but no pink ones), plus a few other sites inbetween, before heading off towards Bernisdale. A single Rose-coloured Starling turned up there a couple of years back and, although I'm not massively familiar with that part of Skye, I was in the mood for exploring so headed off with high hopes. I soon found myself passing Neil's mystery plants and, after a fruitless scan of the fields/fences and rooftops for a Pink Stink, checked the plants in question only to discover they were now in leaf. O-ho, guess what? 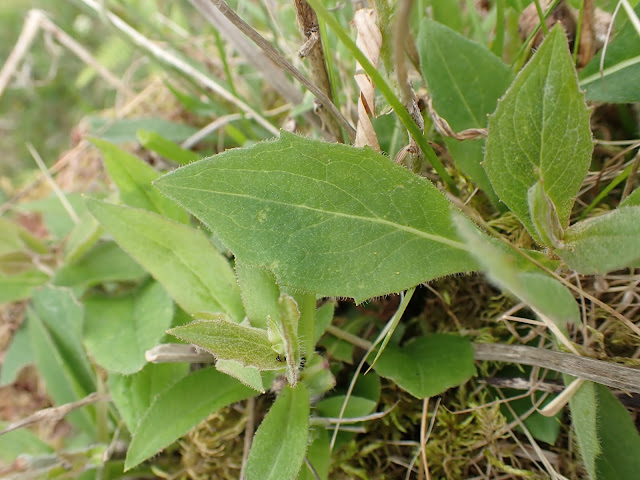 Feeling somewhat vindicated (ha!) I headed back to the wasps I collected and tried to suss them to species. I recently purchased the entire set of RES Keys to Hymenoptera, which cost a small fortune, but at least I have keys to every single hymenopteran out there. Or at least, the ones that were known to occur when the keys were published. Several of the keys are older than I am, nomenclature has altered, species have come and also probably gone. But it is what it is, I'm pretty confident the wasps are Cynipidae and of the genus Aulacidea (again, smug much...moi?)

By reading between the lines I could narrow it almost to species without even glancing at the key. Not all Aulacidea gall hawkweeds, so that narrows it down. Some gall in the roots, others low down on the stems and others gall high up on the stems, as this one did. What it all comes down to, fundamentally, is the shape of the scutellar fovea and the number and length of dorsal lines that run down the length of the mesonotum. Here are the four options as shown in the RES key (itself dated 28th February 1963...)

Somehow these put me in mind of the facemask of The Predator, or maybe a Stormtrooper, but actually they are dorsal views of the thorax for four different species. I had my own thoughts as to which species had caused the galls, but here's my attempt to capture the same features by aiming my camera down the barrel of my microscope. It worked with limited success. I've removed the colour to make comparisons a bit simpler (but mostly to get rid of the awful chromatic aberrations!) 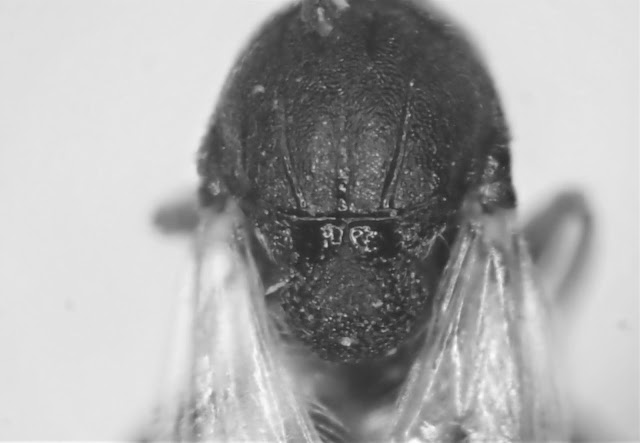 The important feature is the line above the two eyes on the mask, scutellar fovea (the pair of darkened depressions in the lower half of the thorax). Is it straight or is it curved, and if it isn't straight does it curve upwards or downwards. Clearly it is straight, which matches images C and D above. Then we need to check the shape of the fovea, are they like a square with slightly rounded corners (C) or are they wider at the top and with an indistinct area to the lower inner corner (D)?

I'll add another couple of images to help you see what's going on, because one image alone isn't really very clear. 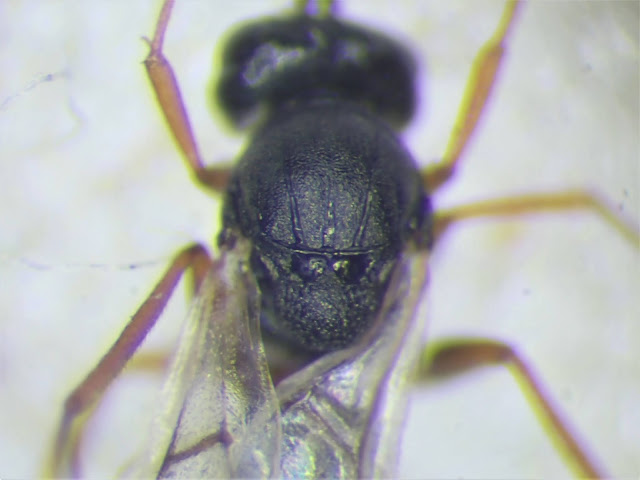 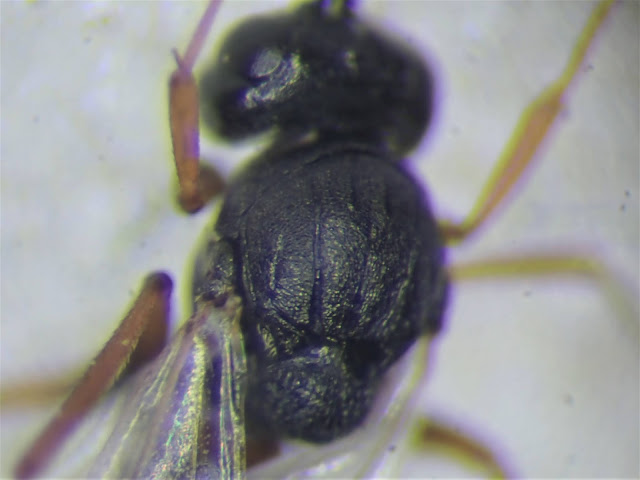 Hopefully you agree that it best matches image D. Image D is Aulacidea hieracii, which is what I suggested it would be a whole 19 weeks ago! Anyway, job done. All we need to do now is identify the hawkweed. I'll maybe leave that one to Stephen, he's the plant expert around these parts!