Grasses in the Mist

The weather today was not great. Dave and Alan both needed to visit the Old Man of Storr to look for a couple of plants. Dave needed Poa glauca (Glaucous Meadow-grass) and Alan needed Alchemilla wichurae (Rock Lady's-mantle). Notice how I put the scientific names ahead of the vernaculars. This means I'm now a fully-fledged botanist. Or maybe it's just that I've been spending lots of time with proper botanists lately.

Given that we arrived before 8am and that the wind was gusting the drizzling rain at something approaching 40mph, it wasn't a complete surprise to discover that we had the place entirely to ourselves. We walked through the gateway and began following the path upwards. 40mph drizzle hitting you sideways isn't actually too bad really, unless of course you were to leave the side pocket of your waterproof jacket unzipped, thus allowing the rain to work its way into your non-waterproof fleece resulting in a sodden fleece, jumper and t-shirt and a rather wet chest. But you'd have to be a complete numpty to do that, right?  *sigh*.....

I've never walked along the Storr track before without passing somebody every ten seconds or so, and often much more frequently than that. Hence I've never really paid any attention to where I'm going on the first section of path, you just face the human chain coming back down the hill, walk against the flow, and that's that. But the path unexpectedly forked, and then just as unexpectedly forked again a few hundred metres later. I didn't remember there being any forks in the path, I'm always too busy chatting and not paying attention when I've been here previously. Visibility was down to about 200 metres. Ordinarily I'd just aim for the cliffs but today I couldn't even see them and I suddenly worried we might not be on the correct path. Keeping the wind to our left, I continued onwards and hoped I was leading us the right way. Much to my relief a familiar pond and gateway emerged through the gloom. Sweet! Dave and Alan followed on behind, each silently wrapped in their own thoughts as we marched upwards towards our target of Needle Rock. It was just too damn wet and windy to attempt any kind of conversation.

Since my last visit to The Storr, which was in July of last year, they've constructed a brilliant stone stairway up the steep section. It's a really impressive bit of work too. No more slip sliding in the mud or destroying the ever-widening verges. Everybody neatly funnelled up one wide set of steps, habitat destruction to the surrounds effectively minimised and no danger of getting bogged in muck and mud any more. Here's a quick video of Dave walking up the steps. I asked him 'Are you having fun?' and he replied 'not so much', but you'll do well to catch much of that exchange over the noise of the wind.

Once we had gained more height the weather decided to deteriorate some more. Oh what joy. I couldn't see Needle Rock, even though it's absolutely bloody massive, but I knew which way it lay so we headed off. The visibility grew steadily worse, down to just a couple of hundred feet now. Suddenly I saw a vague outline in the sky - Needle Rock! We scudded our way across the slopes and took shelter in the leeward side. Holy shite, I'm so glad we hadn't attempted yesterday's Cuillin expedition today, I don't think we'd even have made it across the valley floor!

We struck out along the base of the crag, fully expecting this to be a smash and grab affair. Somehow we spent over an hour scouring the ledges for our target grass and lady's mantle, but all to no avail. I decided to brave the exposed face and was hit by a wall of water being flung at me with very considerable force. The drizzle of our ascent had quite clearly changed into a ferocious downpour, it felt as though I was being water-cannoned. Clinging to the rock I Spidermanned my way around the base, being rewarded with a right proper soaking but still no sign of our target plants. After ten minutes of abuse, I worked my way back around to Dave and Alan to find them sheltering beneath an overhang and talking about birds of paradise - whaaaat??? C'mon chaps, at least play ball and help me search for your lifers!

Figuring we needed to try elsewhere, I scurried across 150ft of open ground to check the base of another huge outcropping and quickly began to search the leeward face of that. Within just a couple of minutes I found what I suspected was Poa glauca. Quite a bit of it too with a few plants just coming into flower. I grabbed one stem and scurried back towards the chaps, now all but invisible to me behind curtains of windswept rain. Here's a few very poor images of the grass in question 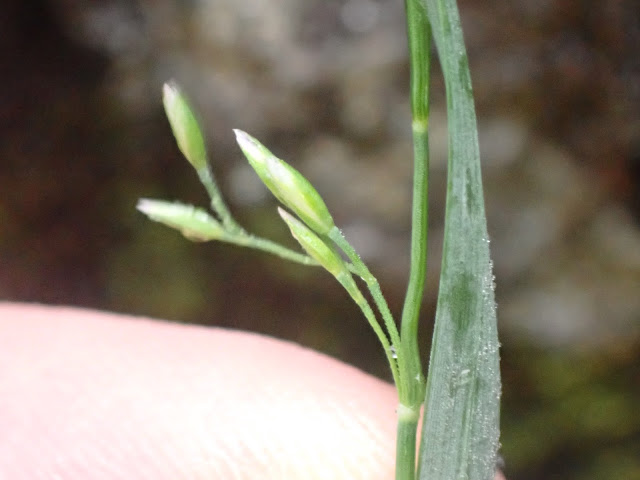 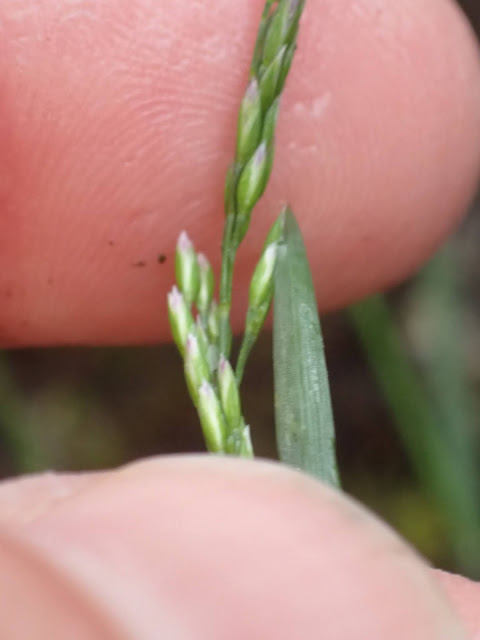 Alan wasn't fussed, he was happy to stay in his hideyhole. All he wanted the Alchemilla. Dave looked into the rain, steeled himself for the dash across open ground, and followed me to the Poa patch. Here he is taking photo's of the grass in question. And remember, this is the leeward side of the rock!

Our handlenses were too steamed up to look through. We didn't dare attempt to reach for the grasses book, it would be ruined in seconds. Dave took a stem to check indoors later. We returned to Alan and set off in search of his Alchemilla wichurae. Despite quite a bit of effort on my and Dave's part, Alan failed to convince himself that he was looking at the real deal, then casually mentioned that he wouldn't be able to tick it anyway seeing as nothing was in flower. He would simply try for it elsewhere later in the year. I won't call him an ingrate, but I wasn't massively impressed that he'd let us spend so much time comparing the hairiness, leaf sinus angles and a multitude of other minutiae on dozens of Alchemilla leaves, all in the lashing rain, when he knew he was never going to tick it anyway. It was about then that I realised I'd torn one arm of my waterproof jacket almost clean off around the shoulder seam, neatly explaining the cold, wet patch steadily spreading across my back. Meh.

Thankfully, abortive Alchemilla quest over, we unanimously agreed that conditions were just too difficult to undertake further botany, so we carefully began our descent. Dave then almost immediately spotted two plants that screamed Poa glauca to both of us (we were now uncovinced by the first grass, but these two looked perfect). Happy that Dave had actually seen Poa glauca now, we continued down the trail. Quite incredibly, there were folks heading up the path as we headed back towards the carpark. One fella was wearing shorts and white trainers, another guy had one of those backpacks for carrying children in. I'm sure that he was keeping warm enough, boldly marching up the steep hill, but his small child must have been frozen/soaked/both in the open-fronted rucksack thingy. Quite why these people, and we must have passed at least thirty of them, were heading up the mountain in these conditions is a bit of a mystery to me. I guess they've come to Skye and The Storr is (quite rightly) very high on the bucketlist. But, naturalists and climbers aside, it can only be for the spectacular rock formations and stunning views, neither of which were even remotely visible today. I reckon visibility was down to not much more than 100ft at times and the wind almost blew me clean over several times, and I'm a pretty solid 200lb lump not a small child or petite lady!

It just reinforces my view that all tourists are crazy. I mean, we had a rare grass to look at, which is a perfectly sane and entirely justifiable reason for heading up a mountain in storm force winds and driving rain. But tourists are just plain crazy, that's all I have to say.

Alan is heading back to Basingstoke in Hampshire this afternoon. Dave is heading off back to Somerset around midday tomorrow. The rain has currently stopped and the wind strength has dropped away. I think we're going pondweed hunting in a loch tomorrow morning. We have a grapnel on a long bit of line, we have the BSBI guide to pondweeds, should be a giggle.