Following on from last week's very successful Small Adder's-tongue expedition to Raasay (see this post), I took myself up to a headland just north of Camas Mòr this afternoon in search of some Skye-based Small Adder's-tongue action. Sadly no joy, the composition of the clifftop sward is quite different from that on Raasay, hence no Ophioglossum were found. However, it was still an enjoyable stroll around the top of the cliffs, looking down onto the nesting Kittiwakes, Shags, Fulmars and auks beneath me. Still no sign of any Killer Whales out to sea. My time will come.... 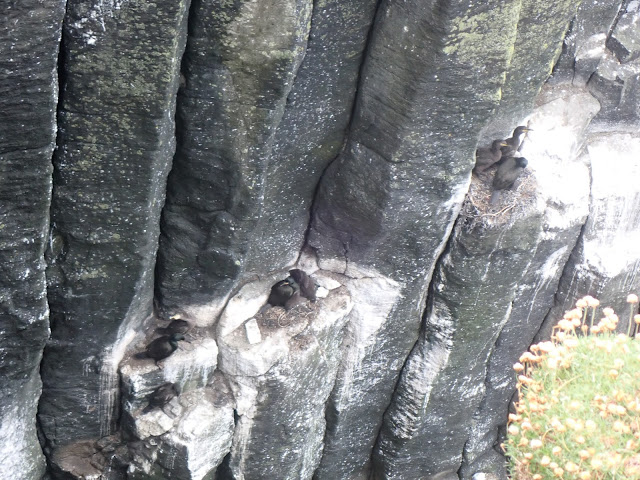 I swept a few flies including three clegs in one swoosh of the net (never try to land on an entomologist wielding a butterfly net, damn fool flies!) and then found a nice male Araneus diadematus on a rock. This is not a common spider on Skye, I very rarely see them at all apart from on coastal rocks and cliffs. Thinking about it, I don't think I've ever seen one on Skye that was more than about 100 metres from the coast and I've certainly never seen one in a garden (the vernacular name is Garden Spider, but I reckon Coastal Rock Spider would be more appropriate up here). Edit: Scrap that, I've also seen them around the base of Needle Rock up by the Old Man of Storr, which is a good mile and a half from the sea (and quite a height above it too).
I'm sure at this point Skev will want to know what the pale lichen is in this pic. Which is a pity, really. (Ha, at a guess I'd say Ochrolechia parella, but I'm really not sure buddy). There were patches of Sea Campion scattered around the clifftop, most of it a little too far down the cliffs to be accessible, but I did manage to gingerly lower myself to a few clumps in order to check them for anther smut. No luck this time, just like the orca that'll be one for another day. 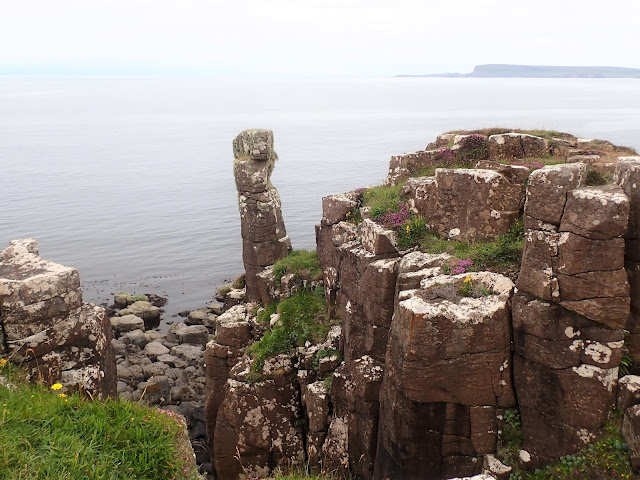 Away from the clifftop I found a smut I've been chasing for a couple of weeks now. This one grows on the anthers of Ragged-Robin and I've been randomly checking the flowers for sign of brown anthers without joy until today. Behold!
There's a recent set of publications that cover various microfungi, I have four of them as hardcopies and the fifth I have saved as a pdf. The one that covers Smuts is also available as a freely downloadable pdf. You can access it by clicking here and if you scroll down to page 39 this is what you'll see 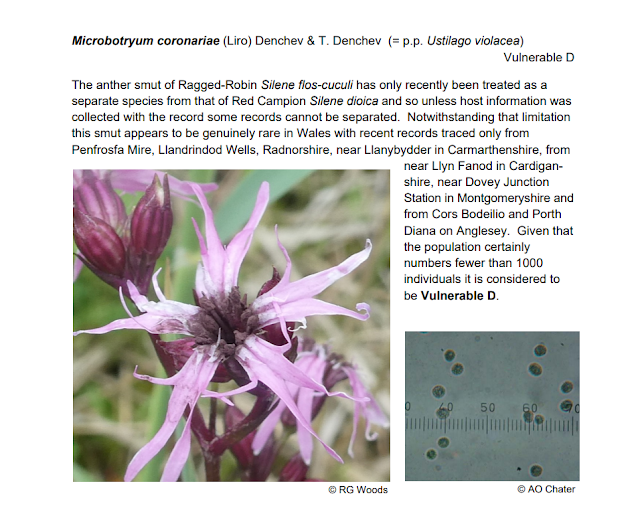 Yep, I'll go with that for a perfect match! I took the infected flowerhead away with me so that I could check the spores under the microscope. I don't have a measuring graticule, something I ought to rectify at some point, but you can see the spores are essentially the same as the image shown in the pdf. 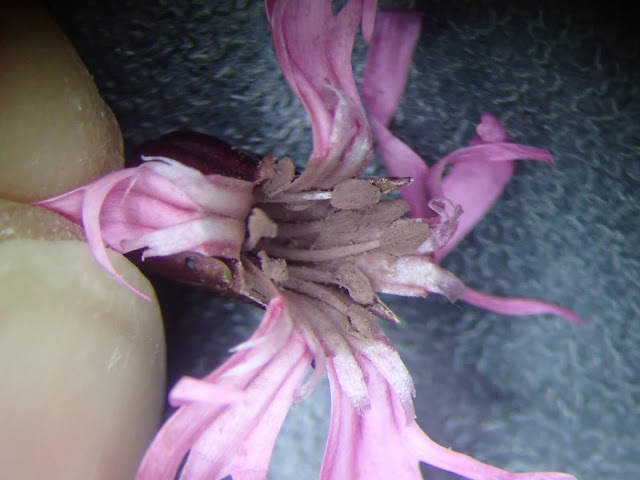 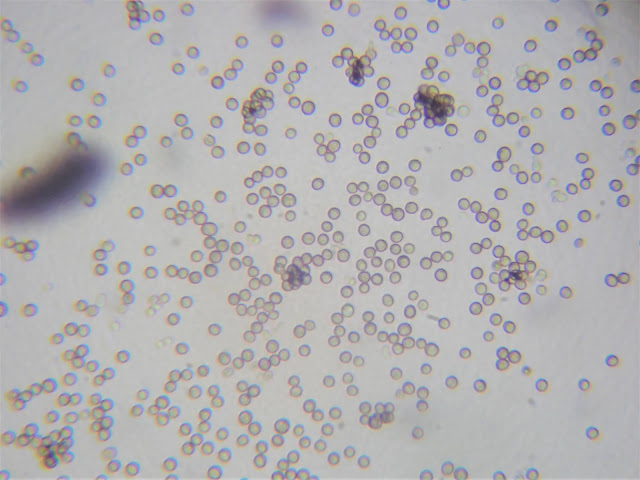 I'm doing quite well for finding lifer microfungi this week; Puccinia commutata on Common Valerian found whilst sat on a wall eating an ice cream on Saturday, nothing on Sunday, then Ramularia valeriana var. valeriana also on Common Valerian yesterday, followed by Microbotryum coronariae today. Cool beans! I also found a patch of Meadowsweet infected with an extensive powdery mildew 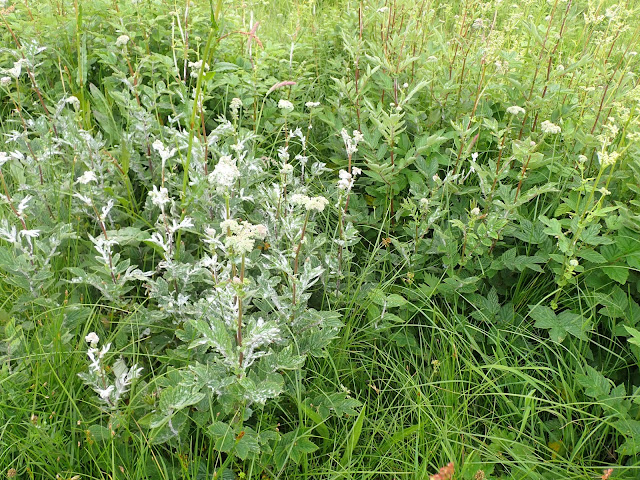 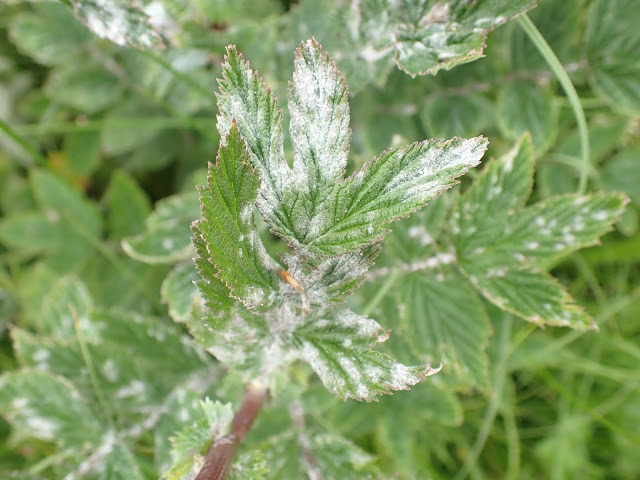 Being a smug dimwit, I didn't bother collecting a leaf to check beneath the microscope. I already knew this was Erysiphe ulmariae, something I've seen lots of here on Skye. Once back indoors I checked properly and now realise that although it could be Erysiphe ulmariae, it's actually more likely to be Podosphaera (Sphaerotheca) filipendulae. Arse. I'll have to grab a selection of leaves from a selection of sites this summer, find out whether we have the Erysiphe and/or the Podosphaera up here.
Last fungus for today, and one that is super-ubiquitous here, this is Septoria scabiosicola, the common leafspot that occurs on Devil's-bit Scabious leaves. 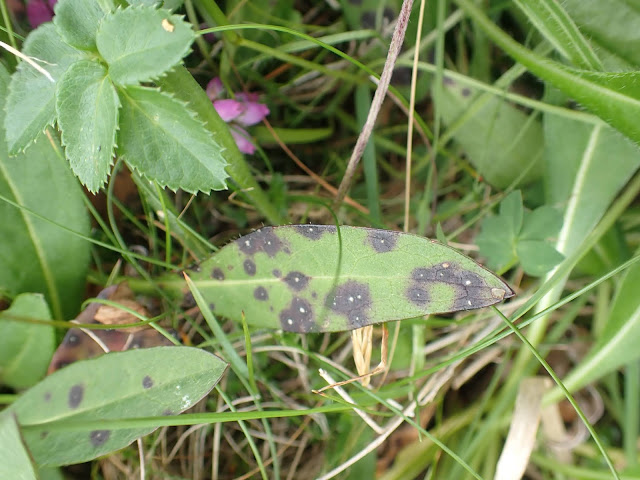 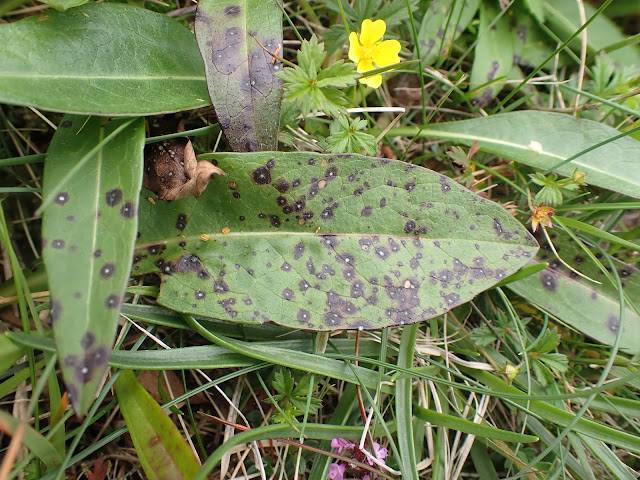 Right, enough fungi for today I think. It's time for me to check those clegs I swiped earlier. I've recently discovered that, despite their being present in plague-like numbers at many sites across Skye, there are hardly any dots on the NBN map for them. I think I need to start making inroads into that oversight.
Oh, and I swept a pair of sarcophagids from Raasay last week. The scheme recorder is very interested in them. I need to set the male's genitalia properly, but he's wondering if they may be a species new to Britain. Watch this space.....
Posted by Gibster at 19:16