A new tick? But aren't all new things a tick, I hear you ask. Well yes, but this was an actual new tick... just read on.
Today was lovely and sunny, the first sunny day for at least a week (and the forecast suggests the last sunny day for the rest of the week), so I simply had to grab my net and get straight out there in search of flies!
What I hadn't taken into consideration was that the weather forecast had the wind direction completely wrong. It suggested a NW breeze, which is why I hit this southern slope of the woods. Unfortunately the wind was sweeping in from the south west and hence straight through the trees I was scanning for sunbathing flies. Bugger, that dropped the air temperature from 9C to 6C hence I struggled to find many flies, though I did find a handful.
I changed tactics because let's face it, swiping at flies with a net that is full of wind is never ideal. Despite owning a proper sweep net, I never bring it out with me - I just use my butterfly net to swipe through the vegetation, which is how I spent the rest of my time in the woods. In this instance I targeted the grass tussocks growing beneath the tree cover. Within a few minutes I'd gathered a few small flies, a handful of spiders, a couple of caterpillars and small wasps which went straight back, plus a tick. My first tick of the year, I popped it into a tube and brought it back indoors for a closer look.
Also new for the year was Pignut, a common plant on Skye. Pignut is one of a handful of plants that I've become particularly fond of, Ramsons tops the list but Pignut isn't too far behind it. Why? Because it's an edible and I'm quite partial to it, that's why! 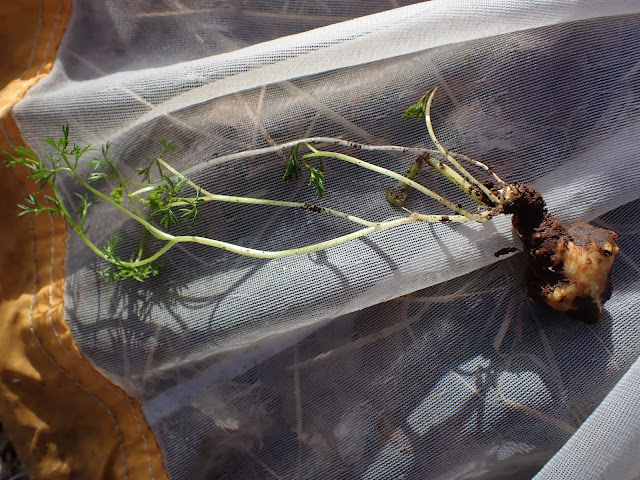 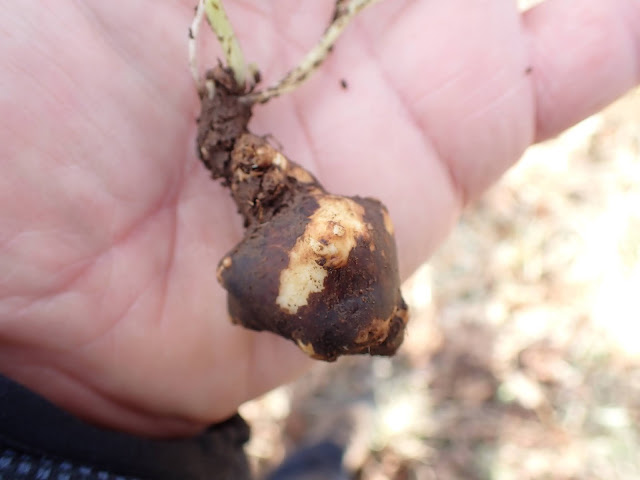 This is the best time of year to eat the 'nut', it loses taste as it puts energy first into producing the leaves, and then the flowers and seeds. But catch it early and it's quite tasty! I always chew the first couple of Ramsons leaves of the year and the same goes for Pignut tubers. The outer layer comes away with a bit of scraping with fingernails and it's good to eat just like that. There's a very scarce plant in southern England called Great Pignut. I've sometimes wondered if it's scarce just because it tastes so good "Oh man, this is great pignut!" Probably not, but hey you never know.
Anyway, getting back to the tick I potted up. Every single tick I've ever checked closely has been Ixodes ricinus, the Deer Tick. There's a pretty decent key to British ticks that I refer to when studying these things and that's precisely where I went today too. Here's the beast in question.
First impressions were that it was a lovely walnut brown colour and that the 'bunny ears' (actually the palps) appeared shorter than normal. Ooh, might this actually be a different species??? I hit the key to find out.
Taking the key to male Ixodes, I ran through several features until I dropped out at a species.
Hopefully you'll agree that the arrowed plate isn't shaped like a circle, or a triangle, or a square. It's not the best image, but shows a symmetrical shape that everyone should be familiar with. 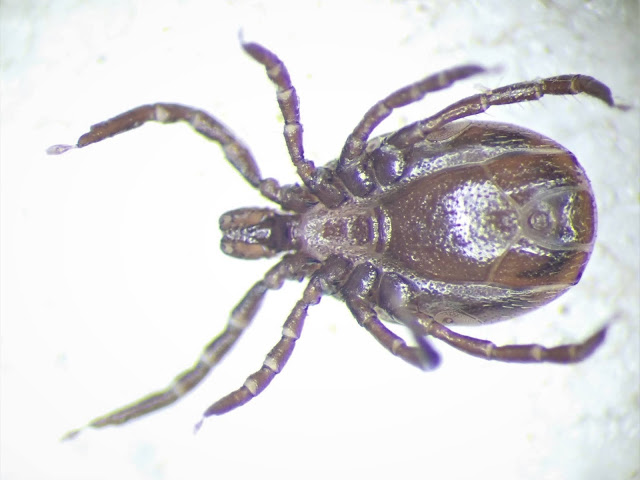 Couple of features to look out for here; there is a long vicious-looking black spur on the inside of the front coxa and a smaller triangular spur on the rearward facing edge of each of the remaining coxae. Also of importance note the shape of the foreleg at the top of the image, ignore the flappy 'foot' at the tip and check the stepped outline of the tarsus. Cropped versions below
These features all point to my tick being Ixodes hexagonus (yep, that plate is hexagon shaped) which is a lifer for me, my second species of tick finally falls after all these years of checking. This is my 190th species of arachnid, soon be at 200 I hope!
The day had one last pleasant surprise for me though. This was the view from my window this evening, though I was standing outside when I took this. No filters, no adjustments, no cropping, just straight off the card. 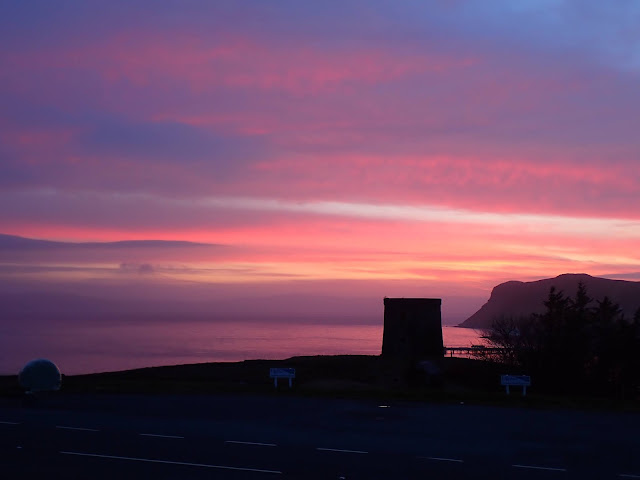