More about those Fleas

I went down to the shore today in search of sublittoral spiders. No luck this time around, though it was nice to see my first Sea Slaters Ligia oceanica of the year. Genetic studies have recently moved these critters away from the woodlice, they are now known to be marine isopods (see p5 of this newsletter).

Heading back indoors empty-handed this afternoon, I figured I would try to identify yesterday's mystery fleas beneath my compound microscope. I wasn't expecting to get very far, but by shining my desk lamp on the slide from above, and with the built in light illuminating from below, I actually managed some fairly passable images. I managed to progress the specimen through the keys without anywhere near as much difficulty as I'd feared.

I'll run this specimen through a highly abridged version of the key for you, just to give you a taster of what to expect should you find yourself keying a flea at some point in the future. Don't snigger, it could happen! First up is the key to families, remember there are 62 species of flea spread across seven families and numerous subgenera in this particular RES Handbook.

1 - Hind coxa with setae on inner face and only one row of setae on the tergites >> Pulicidae.

- No setae on inner face of hind coxa, each tergite with more than one row of setae >>2

Ok, so clearly the first part of couplet 1 doesn't work, so we take the second option which does work, which takes us to couplet 2.

2 - At least one comb present, setae on tergites normal >>3

The comb mentioned pertains to a dense row of thick spines, looking like the teeth on a comb in fact, which occur where the back of the head meets the body and also around the mouth area. One or both of these combs may be absent, or they may both be present. Here's a somewhat poor picture of the head area of my flea

We can clearly see that there is a strong comb at the back of the head and there's a short comb below the head too. By following the options in couplet 2 we move onwards to couplet 3.

The genal comb is the lower one in the image, we can see that it consists of three spines and they aren't pointing downwards. So we move on to the next couplet.

Well we have both on our specimen, the pronotal comb being the big set of spines at the back of the head where it meets the body. So we go to couplet 6.

- Genal comb either not vertical, or vertical with lanceolate spines, frons is rounded >>7

Our specimen has three lanceolate spines, not two or four blunt ones, and they aren't set in a vertical arrangement. The frons is the front part of the top of the head. Our specimen has a rounded profile. Moving on we arrive at couplet 7

By my reckoning, we drop out of the key at Ctenophthalmidae. At the very last couplet of the family key too.

Tuning to page 117, we get to start all over with the key to species in the family Ctenophthalmidae. The introduction to the family tells us that these fleas are found on small mammals, occasionally birds, with a broad range of host species. I found these fleas in a small mammal run, so far so good...

1 - Club of antennae fused, appearing to have 7 or 8 segments >> Rhadinopsylla

- Club of antennae not fused, with 9 distinct segments >> 4

Now this is a real pig to see in the images I took, though in real life where everything is in 3D not 2D it's a lot easier to make out how many segments there are to the club. Here's the best pic I managed 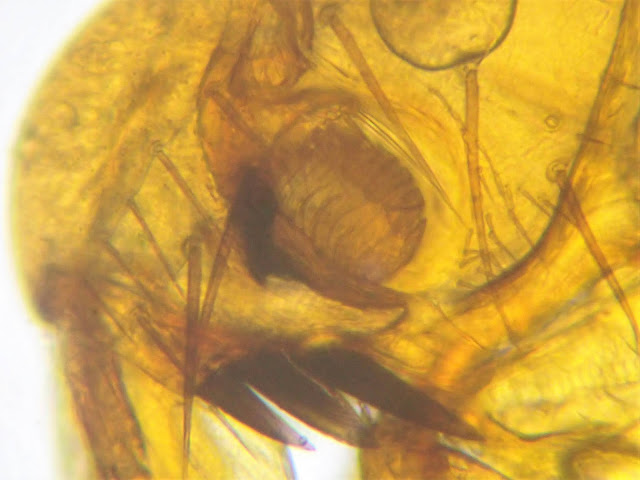 Believe it or not, there are nine clear segments to this club. The depth of field is very shallow on the compound microscope so the basal segments, which are the narrowest, don't show up particularly well in this image. But they are there! So we move on to couplet 4.

4 - Genal comb of four well-developed spines, none of which are behind the eye >>Doratopsylla

- Genal comb of 3 or 5 spines, with one situated behind the eye >>Ctenophthalmidae  >>5

The eye is the elongated dark mark above the rear of the three black spines in the image above. We're getting somewhere now, our flea is in Ctenophthalminae which has just five species in two subgenera.

Excellent, we have our flea to genus level now - Ctenophthalmus it is!

What the heck is a spiracular fossa?!?! I hope I hear you cry, because that's what I did. It's not that tricky once you know what you're looking for and it's surprisingly clear to see the spiracular fossa in this next image. Look at the huge black bristle pointing towards 2 o'clock offscreen. Beneath the base of this bristle, actually inside the orange body itself, you'll see a long convoluted 'tube' or 'pipe' which is darker near the top of the image than at the bottom of the image. This is the spiracular fossa and you can see that it splits into two as it reaches the upper surface of the body; one fattened part seems to head into the base of the large bristle, whilst a shorter, narrower section quickly fizzles out as it heads to the right. So our spiracular fossa is Y-shaped which takes us to couplet 10. Again, this is a lot easier to appreciate with the book in front of you, illustrating the differences. 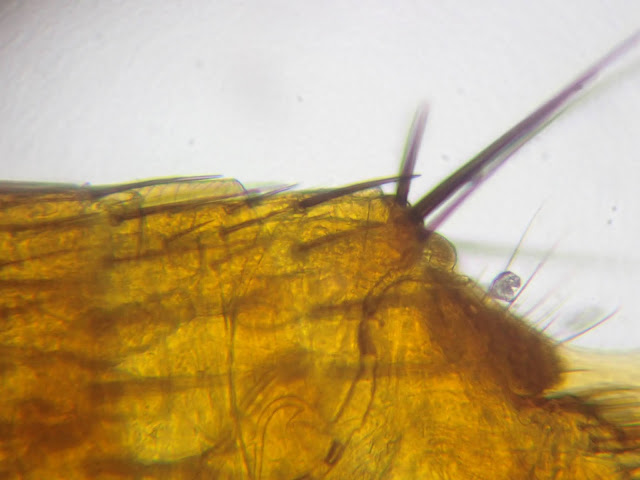 10 -"check invisible minutiae of the genitalia, which only become visible after you've soaked the flea in chemicals for several days. Only then can you progress towards it being either Ctenophthalmus bisoctodentatus or Ctenophthalmus nobilis. Bad luck Gibster, sucks to be you." Well, that's not quite how the text worded it, but that's the end result either way. Bugger.

I read through the species accounts for both possibilities. C.bisoctodentalis is predominantly a mole specialist, though it also occurs on small mammals such as voles and Wood Mice. Moles aren't native to Skye, they were fairly recently introduced to one part of the island, and have effectively 'filled up' that area which is bordered by impassable (to a mole) mountains on one side, a river to the other and the open sea in the other direction. They're stuck down there, they simply don't occur up on the Trotternish where I am. Voles and Wood Mice do occur here, commonly. The flea itself has not been recorded from the Inner Hebrides, though that's not to say it isn't here.

C.nobilis is common on all types of small rodents, including voles and Wood Mice and has been recorded from Mull in the Inner Hebrides, hence is likely to be on Skye too. On Mull it was found on Hedgehogs and Bank Voles, We only have Field Voles on Skye, bizarrely, but they've spilled into woodland and have filled the Bank Vole niche.

On the face of it, my flea is probably Ctenophthalmus nobilis, but without looking at the genitalia I can't prove that. Maybe I can dissect one...doh, why didn't I think of that earlier?

Stay tuned, I wish to get to the bottom of this. And then I can take a look at the bigger species I also collected.

Who knows the connection to this next track (it's not a tough one, to be fair...I just love the video!)

Update: not the easiest thing I've ever done, by I managed to remove part of the external shell of the flea and reveal the necessary features - partly. Partly, but enough to clinch a specific ID! 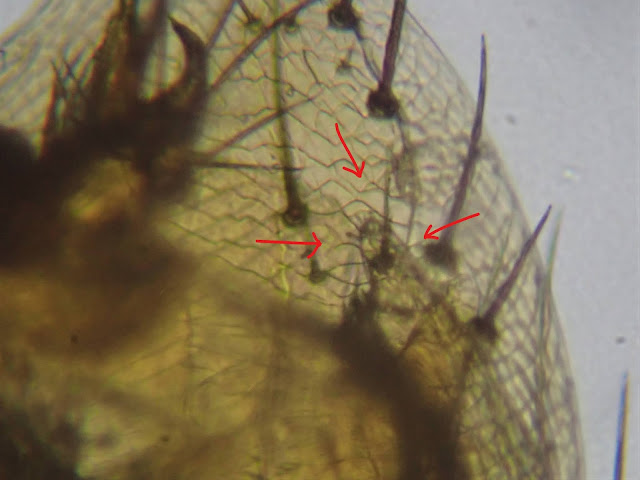 See that lobe I've arrowed? You'll see that is it quite narrow and has a rounded tip with half a dozen or so short hairs on top of it. Humour me, I know it's a poor pic... The shape of this lobe, part of the movable process of the clasper on a male flea, tells us that this is indeed Ctenophthalmus nobilis and not Ctenophthalmus bisoctodentatus which has a far broader tip this lobe.

Excellent, Ctenophthalmus nobilis is a lifer for me and was totally unexpected. Two of the fleas I collected are definitely of a different species, but the remaining five look identical to this. I shall key them through anyway, no reason to think there's a third species involved, but I won't know for sure unless I check! Hopefully the rest are females, you don't need to open those up to differentiate between the two.