It's a flippin' Greenfinch!

The day began with another of my scrambled egg mish mash on toast extravaganzas, swilled down with coffee brewed strong enough to kill aquatic life. In all honesty, the mish mash really could have done with some diced red pepper, tomatoes and chilli powder, but we lacked those. Once again The Ghost declined to join our feasting, preferring to stick with the safety and comfort provided by a cigarette and bottle of fizzy pop. His finger still looked decidedly bruised, battered and broken, but he seemed in better spirits than yesterday. Eventually we were ready to hit St Agnes in search of rare plants and adventure.

The Ghost had red hot gen for Argentine Dock on Gugh and the tide was sufficiently low upon our arrival that we could casually saunter across the temporarily exposed sand bar from Aggie to Gugh. But no sooner had we set foot on the bar than Tiny spotted some rockpools. "Do we have time to quickly check these?" he asked, striding purposefully away from us towards the sea. Ha, I guess so buddy!

Within no time at all, Tiny was busily finding stuff. So busily finding stuff, in fact, that he couldn't tear himself away from the pools long enough to even take a photo of our findings. Luckily, his big hairy entourage fella was there to help out. Personally, I was glad to see the oafish brute put to use at last, the freeloading so and so...

Eventually Tiny finished messing around in the rockpools and we were allowed to continue along the sand bar and onto Gugh itself.
My first time on Gugh was way back on the 19th October 1991. That was a great day! A dozen or so of us had Britain's sixth Isabelline Wheatear flying circuits around our heads, then landing and running between our legs. To this very day, it remains a beautiful faded-piss-coloured delight in my mind's eye. Afterwards, back on St Marys, I ticked Red-breasted Flycatcher, Golden Oriole, Richard's Pipit and Rose-coloured Starling. The previous day I'd ticked Eye-browed Thrush, Grey-cheeked Thrush and Sora. The following day it was Tawny Pipit and Yellow-browed Warbler, soon followed by Little Bunting and Red-throated Pipit. Blimey, that was my first time on Scillies - no wonder I love it here! My second time on Gugh was sometime in the early 2000s and I missed whatever bird it was I'd gone across for. I'm not entirely sure I'd been back since, hence this was effectively new territory for me. We walked across the bar where I was shocked to discover...houses! Like I said, Gugh is effectively 'new' territory for me.
Tiny was suction-sampling the sand, or so it appeared. I found some small rocks and unearthed a few carabids which turned out to be Calathus melanocephalus and Nebria salina, the former a lifer for me. Lifer for The Ghost too, except he didn't see them due to my sneakily shoving them into a pot and straight into my pocket. 'Rampant suppression' was the precise phrase later used, I do believe. Anyway, he was supposed to be searching for Argentine Dock not beetles, the dozy knobber... I also found an impressively large staphylinid which keyed through to Ocypus aeneocephalus, a lifer for all of us.
Hey, so who wants to see a magic disappearing trick? This is the spider Arctosa perita, freshly suction sampled from sandy soil and popped into a pot for viewing. Keep your eye on the spider

It's a very cool spider, one which I've only seen once before some years back on a sandy Dorset heath. Straight after one very cool spider came another, the crazily named money-spider Walckenaeria unicornis, the male of which exhibits disproportionately large pedipalps (boxing gloves) as seen in this image 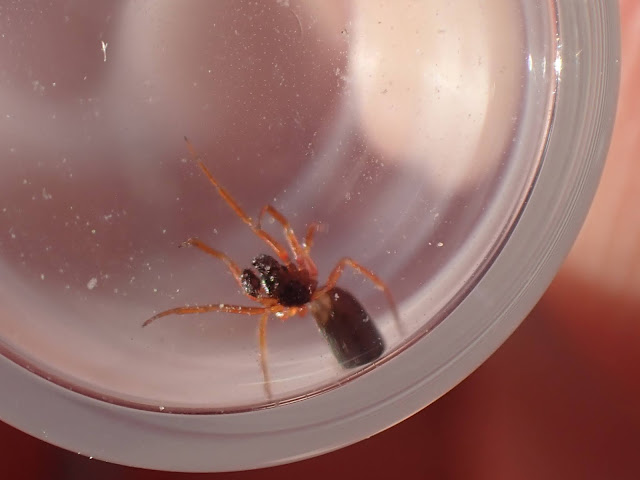 He also has a tiny curved 'horn' on its head, hence the name unicornis. You can just about see the 'horn' in this massively cropped image 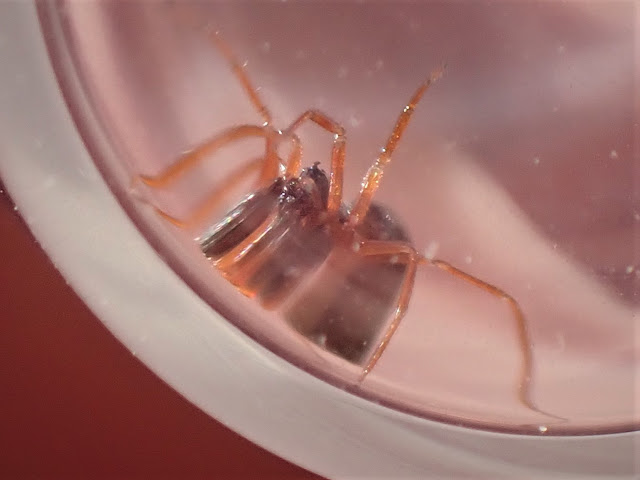 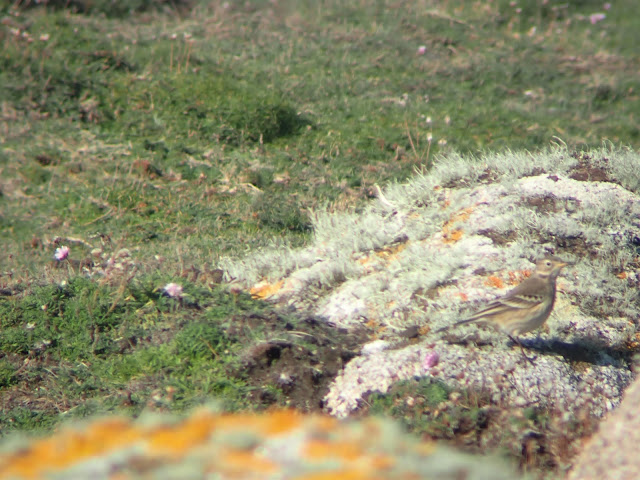 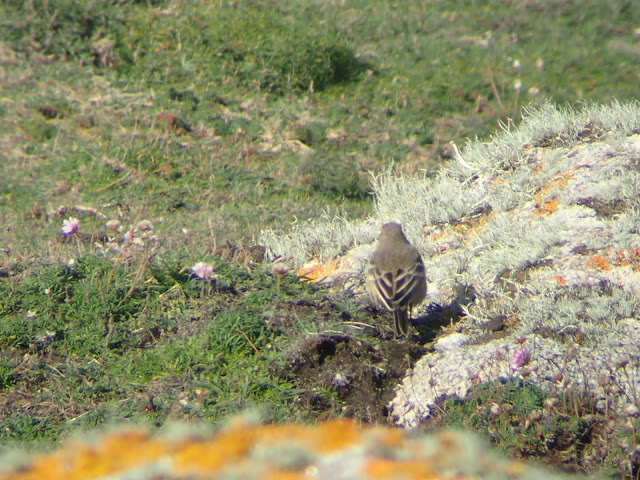 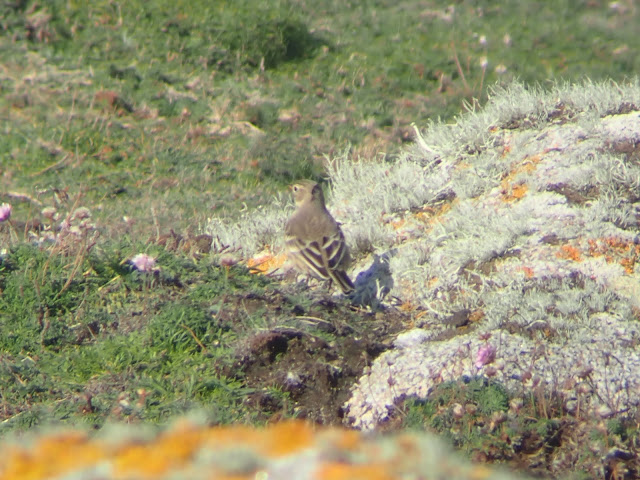 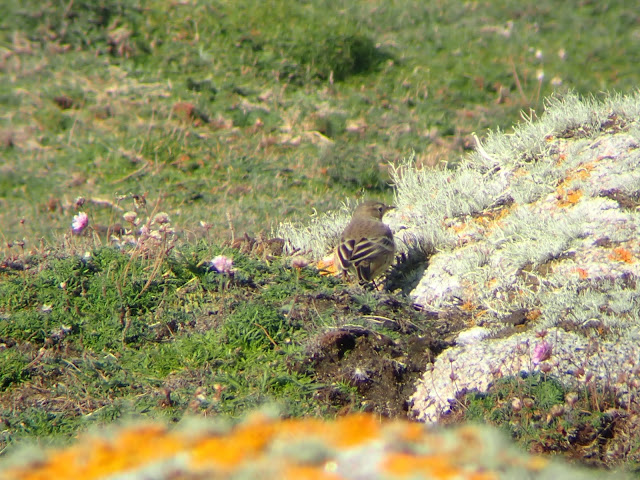 None of them precisely award-winning shots, but I was pretty pleased all the same! Then I had an idea. Why not take a bit of video footage too? I did this by holding my camera up to my binoculars and just hoped for the best
Again, hardly award-winning quality but not too shabby for a handheld compact! We enjoyed this bird for quite a while. Even The Ghost was heard to mutter something along the lines of "It's actually quite a nice bird. You know, for a pipit I mean". Bless his enthusiastic cotton socks. Richard Thewlis arrived pretty much as we were departing, undoubtedly the most gifted bird artist I've ever seen at work. We once stood next to each other with a Blackpoll Warbler moving through sallow canopy just above our heads. To watch him precisely replicate a moving bird onto paper via the medium of soft pencil was just stunning, I have no idea how folks do that. But today we were already heading off, so I didn't manage to see him in action. He seems to have moved onto paints now.
We hurried back to the large rock shaped like a huge dick. Ghost was first on scene, having left Tiny and I to our 'nanoscopic spiders' vacuumed up and tipped into the sieve tray. Hence, by the time we arrived he had already found our target!
"Better come over and look at this" he advised. Holy cow, that was it!!! Top work, Ghostie!
After I'd finished squealing, hyperventilating and ever so slightly peeing myself in excitement at FINALLY seeing Least Adder's-tongue, I looked around and noticed several more plants beneath our elbows and bellies. More stunning images below 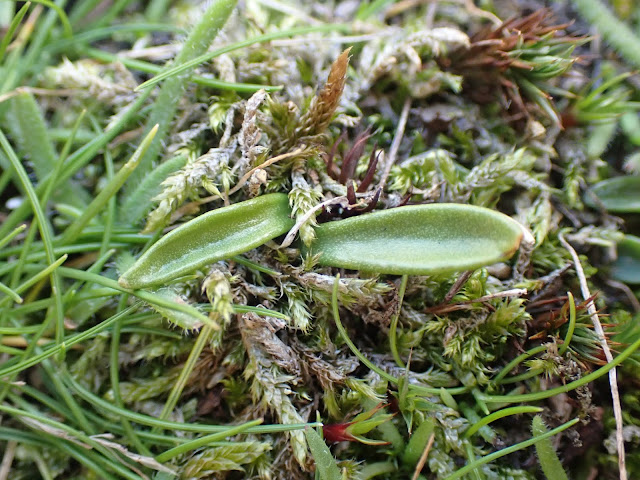 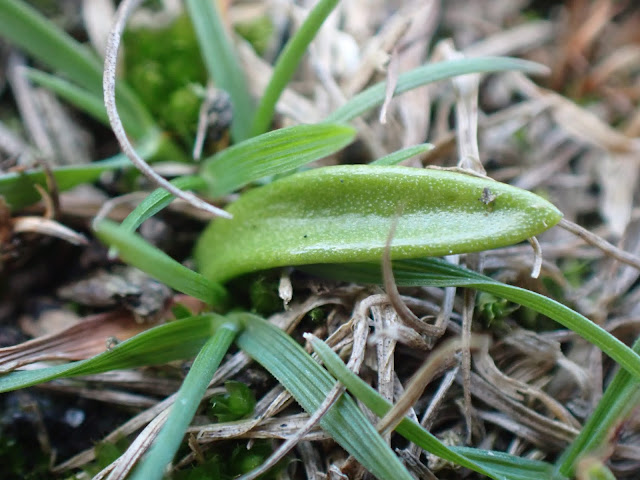 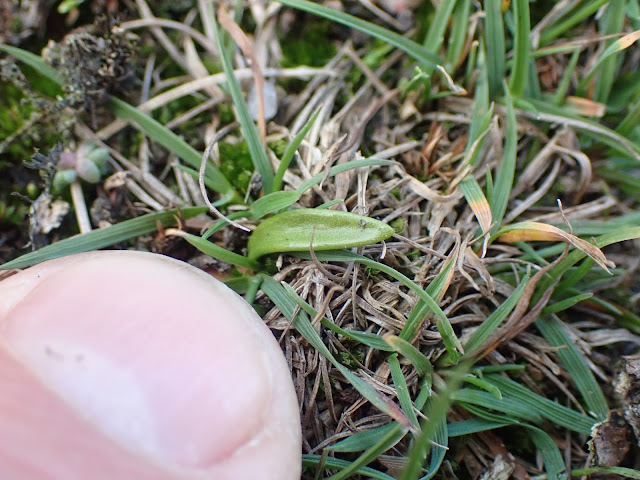 I found two plants maybe fifty feet away from the main cluster that The Ghost had found. Suddenly a yell, followed by pandemonium, as a solitary spike was discovered! Holy crap, I may have wet myself just a little bit more - this was just incredible!!! 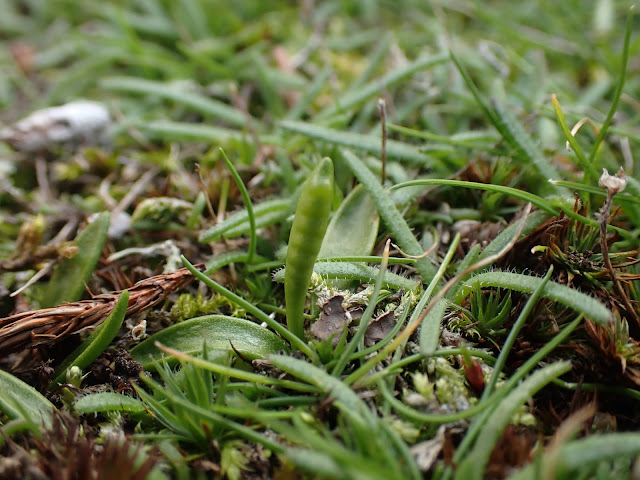 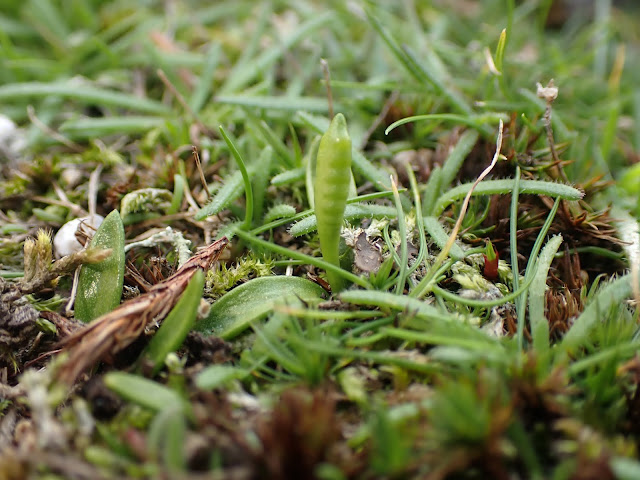 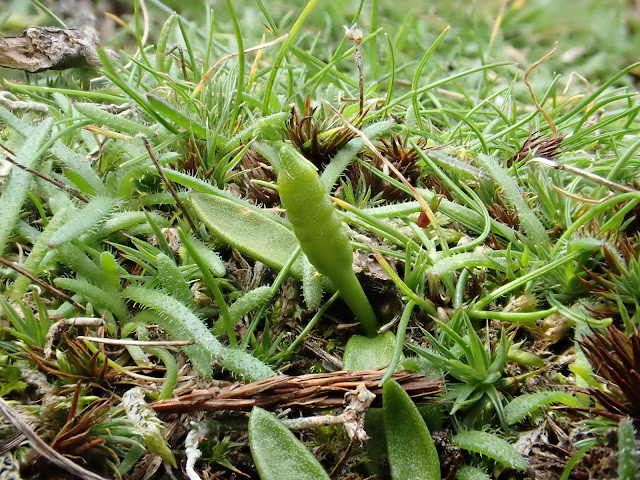 Least Adder's-tongue has been right up there near the very top of my PSL Hitlist for many years. I had presumed it was dormant until about November, that the spike wouldn't be up until December, that my chances of clapping eyes on this incredible rarity were effectively zero without a midwinter expedition to these beautiful isles. Ghost had scoffed at this, telling me we had a fighting chance in October. Secretly I had doubted him, certainly I never for a second thought we'd see an actual fruiting spike! THIS was species of the trip for me, a magical moment to be forever cherished in my memory.
Then Tiny went and ruined it, blasphemous loon that he is
After our elation at finding Least Adder's-tongue, we took a slow wander around the top end of the island, finding Lesser Quaking Grass for Tiny, noting a sudden pulse of several hundred Swallows pushing through above Big Pool, plus I 'rampantly suppressed' a Calathus mollis that I found beneath a stone, potted and shoved into my pocket. Unlike the huge adult female Dysdera crocata which I also found beneath a stone. I was definitely not putting that into my pocket. With chelicerae like that, she could probably rip her way out of the tube and do some serious damage to my nether regions. I showed her to Ghost and Tiny and carefully popped her back beneath her rock. What a fantastic day we'd had. Least Adder's-tongue, American Buff-bellied Pipit and a stringy grotfinch too! Marvellous.