Anybody who has seen my phone will know that it has zero internet capabilities. It has a torch and a game called Snakes and is pretty much held together with congealed pocket fluff and a prayer. Even the screen is cracked and is mostly missing. But it works fine for sending out texts to Skye Birds Bob (the local bird recorder) on the odd occasion I find something worth sharing. Highlights this year have been few and far between, even by my poor standards. To be fair, I do tend to concentrate on my home 1km square and of late it's mostly been inverts and plants over the birding.

But there's no getting away from the fact that migration is underway up here. The summer migrants have left, the winter migrants and passage birds are arriving. I had a wonderful day a few weeks back when the Pink-feet skeins first arrived, they've gone over in good numbers but, apart from a skein of 50 or so over Portree today, they've dried up now. Whoopers are currently passing through in small family parties, I've yet to see any just yet though.

I spent mid-morning blowing leaves off the lawns, but afterwards spent my time quietly building something in the garage. From here I heard the noise of geese going over. Stepping out I spied a flock of 65-70 Barnacle Geese overhead, heading eastwards. These are my first Barnacles of the winter and only my second sighting from the hotel. As I stood there, staring upwards at the fast departing geese, I heard several Redwings and watched a small flock plummet from the sky into the trees behind the hotel, these also being my first for the winter. Views were inadequate, but I suspect they were Scandinavian rather than Icelandic birds. Time to text Skye Birds Bob, I thought. I mentioned the Barnacles and received a "thanks Seth" response. Cool.

All week long I've been desperately trying to get in on the Yellow-browed Warbler action without any success. Nationally, these smart little sprites have been seen in ever increasing numbers throughout the week and the Outer Hebrides have been getting more than their fair share. Barra had an incredible thirty five Yellow-browed Warblers recorded yesterday - thirty five! Even given the chances of duplicate counting, there are clearly a lot of them out there. I received a message from The Ghost last night, telling me to pull my finger out and find one on Skye. As soon as I finished work I sped off into Uig Woods. 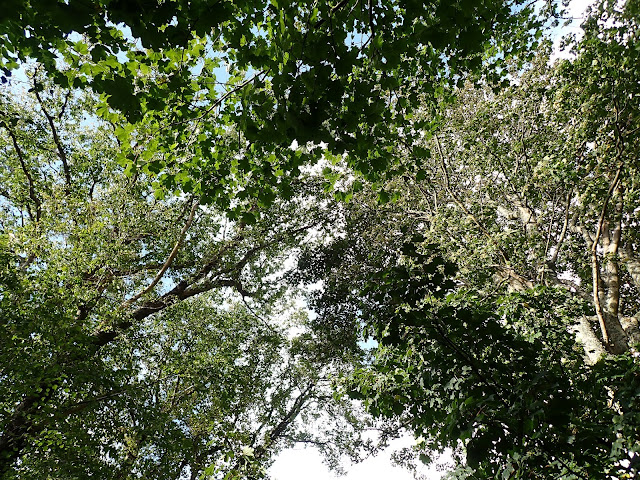 I entered the woods and began pishing. It didn't seem very birdy, a Robin and a Great Tit came in to investigate. I moved on about 100ft and tried again, the air was still and I could see tiny flies swarming in the spaces between bushes. Piiissssh-piiisssh-piii....ooh! Hang on, what was that?!?! A superbly fresh-looking Yellow-browed Warbler peered at me from no further than twenty five feet away, flitted higher into a blackthorn bush, looked at me again and zipped off. Get in!!! I could see it moving around deeper in cover but, despite my already having the camera out and switched on, it never gave me a sniff of a chance to photograph it. Oh well, happy days, I knew I'd find one in the end. Time to text Bob again

Got a Yellow-brow in Uig Woods, only been here 10mins :)

That was at 3:57pm. Bob came back with You deserve that for your efforts. Loads all over.

I continued working my way along the trail, pishing at various strategic points along the way, when I was pleasantly surprised to see local birder Martin hurrying along the track. "Brilliant timing mate, I just had a Yellow-brow back by the carpark" Then we both looked towards another figure striding purposefully our way from the other direction. It was Nick Hodgetts, bryophyte god himself. "Amazing timing bud, I just had a Yellow-browed Warbler back there a little while back!" "Yes, I know, I saw your text so hurried over" came the reply, which is pretty much what Martin said too. Hmmm...but I hadn't texted Nick or Martin. It turns out that Bob has a Skye Birds WhatsApp group going and both Nick and Martin are on it. "I had a flock of Barnacle Geese go over earlier too" I said. "Yes, we saw that" came the reply. Haha, so apparently Bob is simply forwarding my messages to the group (heck I don't even know how many folks are on it) and they all see it word for word. I'm going to have to make sure I don't cuss or swear or use bad grammar from now on.

But anyway, we were now three birders and the other two were keen to see this Yellow-brow for themselves. Particularly Nick who has never seen one before. Sadly it soon began to rain and grew cooler, I pished in a Robin but that was all. Nick offered to play the call on his phone. Nada. I suggested he play Tengmalm's Owl in case it came in to mob, but no joy with that either. We gave it a wee while longer before quitting in the ever increasing rain. 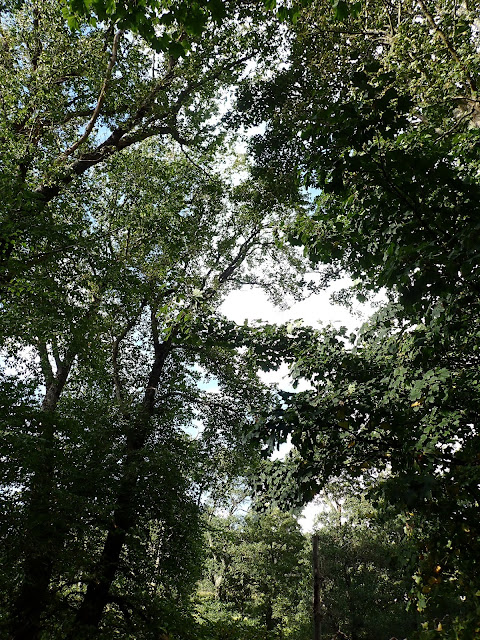 Back indoors, I took a screenshot of today's Skye Birds Sightings and sent it to The Ghost 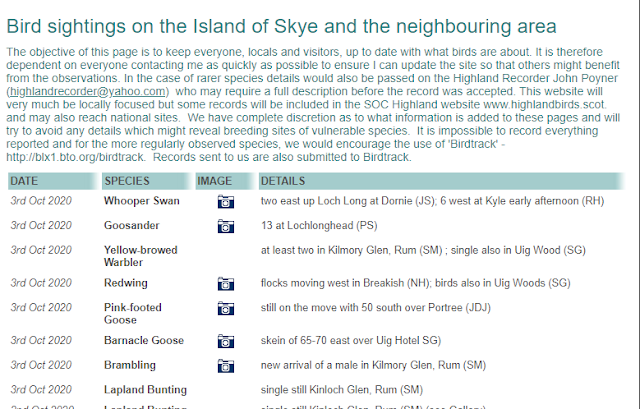 Only then did I think to check the state of play out on Barra... 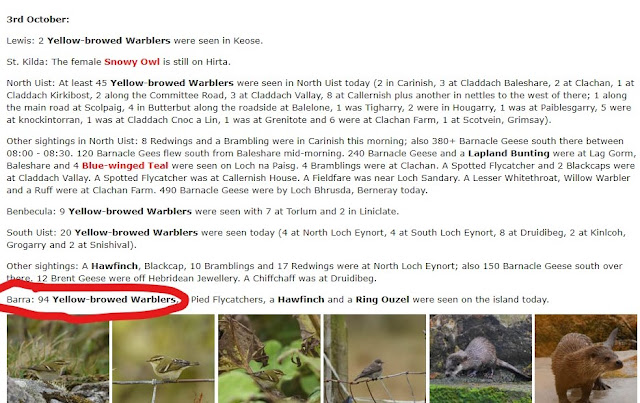 FML. I mean, actually FML. NINETY FOUR Yellow-browed Warblers??? On an island with about ten bushes on it? Holy crap, that surely must set some sort of British record for density of Yellow-brows in one single locality. Quite unreal, Yellow-brows were a damn good bird when I was younger. I had nine in a day on Bryher in 2016 including four together, all self-found, and I was absolutely buzzing with that. But ninety four????

The weather is meant to be crap tonight and tomorrow. There won't be any mass overnight clear-out. I'll get back down there after work and see what I can find. There have been some truly crazy finds over the past few days, I'm kinda glad I don't twitch any more else I'd be tearing myself apart trying to see everything. Mostly in the Northern Isles or along the east coast - Two-barred Warbler, Eye-browed Thrush, Siberian Thrush, White's Thrush, Pallas' Grasshopper Warbler, Masked Shrike, Rustic Buntings, Great Snipe, a potential Pale-legged Leaf Warbler FFS and seemingly billions of Yellow-browed Warblers all hailing from the east, whilst from the west the Yanks are appearing with a couple of Swainson's Thrushes, Upland Sandpiper, Red-eyed Vireo and a stonking Tennessee Warbler all recently on offer. Chuck in a couple of Black-browed Albatrosses from who even knows where and it's been one heck of a start to the autumn rares!

I shall be on Scillies this time next week, along with The Ghost, The Lyons and TeamTiny. Scilly has had Dotterel, Wryneck, Sabine's Gull and Balearic Shearwater so far this week, plus a Nightingale which would be a Scilly tick for me. Sheesh, I really hope it picks up soon!