The weather this morning was downright horrible, as it so often is on my days off work. But by mid-afternoon it had stopped raining so I headed out in search of flies. In a strong wind. What could possibly go wrong... It turns out that finding flies is entirely possible even when it's blowing a hoolie, all I had to do was alter my search method to suit the conditions. I headed into nearby Uig Wood and headed up the hill to an area dominated by Sycamore and Hazel. The Hazel didn't much suit my purposes, but the Sycamores were productive


I found this fantastic page dedicated to Drepanosiphum platanoidis. It explains all about the uncommon 'red' morph (as in my image) and why the 'red' autumn individuals exhibit the black cross bars usually only found on the 'green' spring generation. This is also the last time you'll see a leaf in this particular post. Today it was all about tree bark.

All of the trees in this image are Sycamores, apart from the thin screen of Sitka in the background that mark the boundary of this secondary woodland. The fenceline was fixed before lockdown, so the understorey has been spared the attention of the woolly maggots which munch the surrounding hillsides down almost into the dirt. I suspect these trees were planted, they all seem to be of a similar age and structure, but I've yet to ask anybody who actually knows for sure.

Today was windy. In the above image the camera is facing directly into the wind, hence I spent my time searching the leeward side of these tree trunks for sheltering flies. I'm going to bung in a handful of images that hopefully give you a feel for that process. Honestly there are flies in each and every pic, no need to treat this as a test! 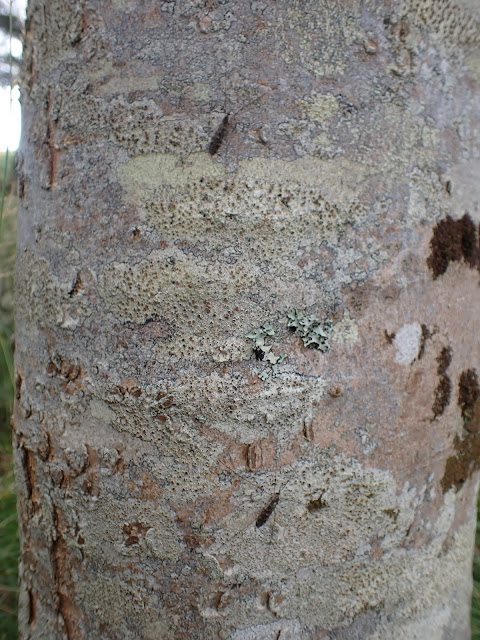 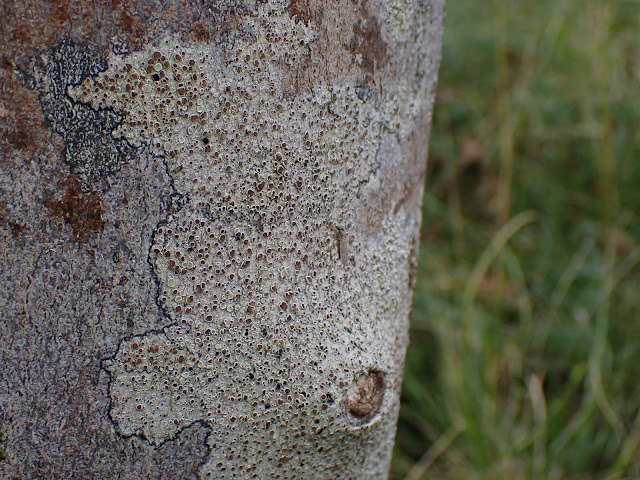 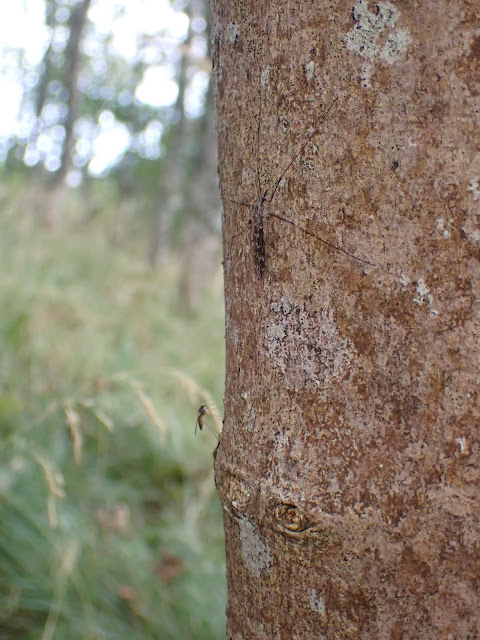 Ok, so they were all pretty easy - just look for the non-tree shapes and silhouettes. Six flies in three pics, no hassle. But what about this next series of pics? How long until you realise what you're looking at and what is happening..... 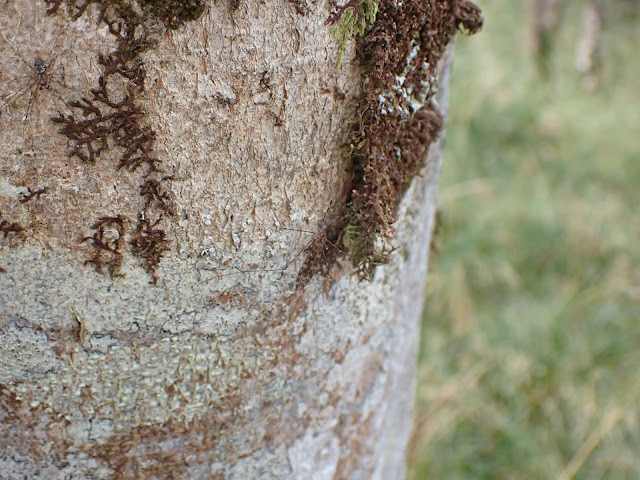 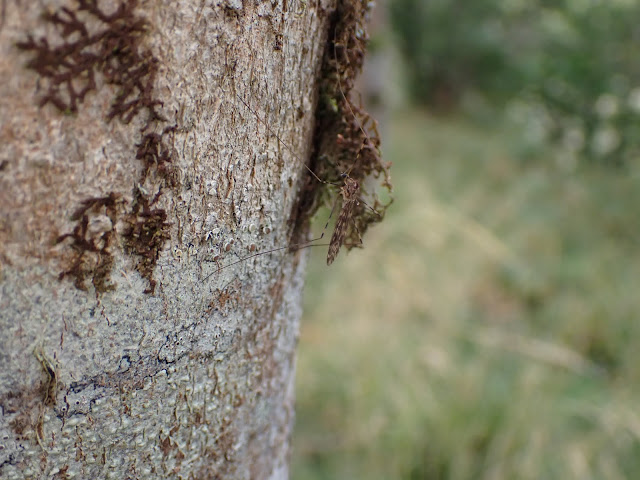 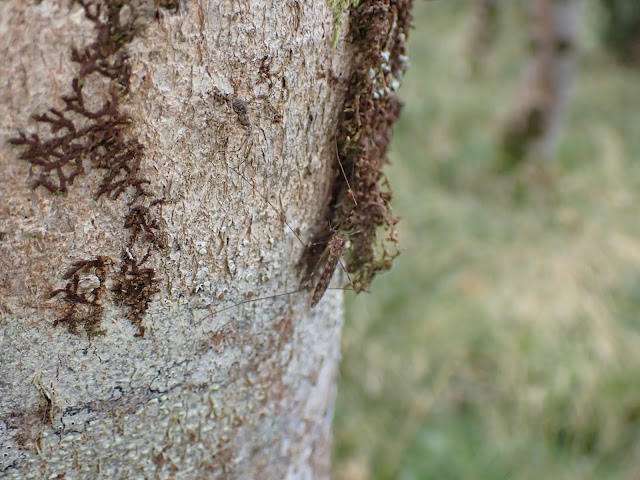 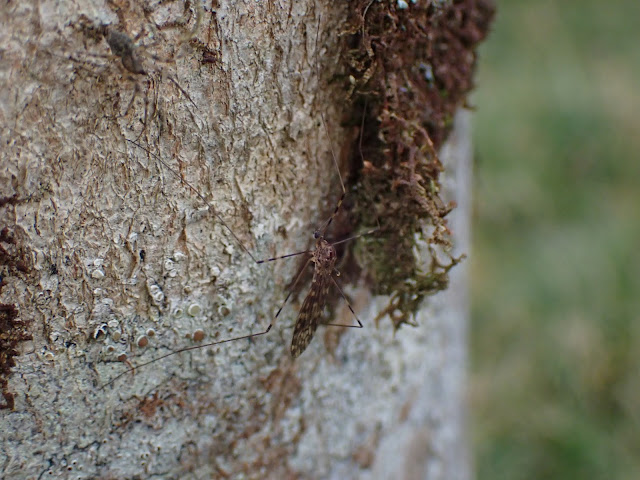 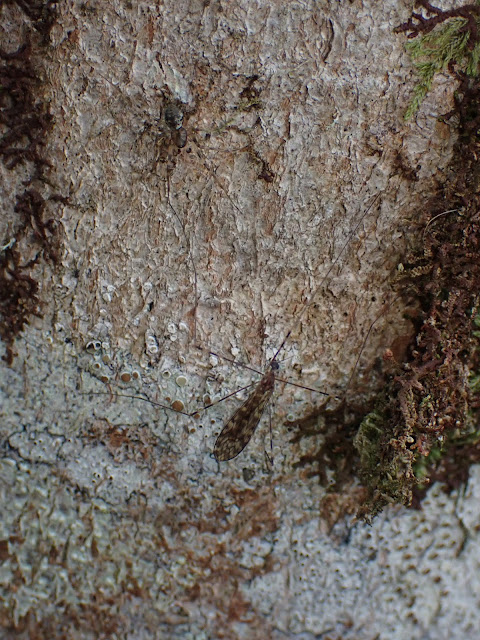 This is a very lucky Limonia nubeculosa (note the black and yellow banded 'knees'). If you zoom in on the final images, you can see that there is a spider touching its front left leg. A moment after I took the last pic, the cranefly made a very rapid exit and all that was left to see was one unlucky Drapetisca socialis


Drapestica socialis is a common spider in Uig Wood. However, I noticed that there are no recent records from anywhere on Skye so have been zipping around from wooded area to wooded area and have been finding it wherever I look. It's colloquial name is the Invisible Spider and, despite the fact that they're very well hidden against their chosen substrate, the term 'invisible' in this instance refers to their web, not the spider itself. If the light is shining at just the right angle, it is possible to see their ultra fine web running across the bark of a tree. If you look closely you should be able to see it catching the light in this cropped image

After an hour or so of searching trees for sheltering flies, I had formed a firm conclusion in my mind. Different types of fly shelter at different heights on any given tree trunk. By and large, all I was finding were craneflies, Sciapus (a doli fly), muscids and the odd Sylvicola or phorid. Remember that habitat shot above...here it is with coloured dots!

So let's break this down. All of the Sciapus platypterus that I found today (c.20) were within about a foot or so of ground level. The 30 or so craneflies I found (Tipula and Limonia species) were all within four feet of the ground. The muscids I noted (maybe 20) were all above head height, almost invariably sitting on/next to hangs of Lobaria.

RED - Sciapus platypterus always low down near to ground level
YELLOW - craneflies from near ground level up to about chest height, but mostly lower
BLUE - Muscids always above head level and tucked up close to overhanging lichens
GREEN - Invisible Spiders, always on areas of unvegetated bark with prominences above

Clearly there will be a degree of observer bias going on here. I wouldn't spot any Invisible Spiders that were quietly sitting at ground level or way above my head height. Ditto the craneflies, though I did spend a bit of time looking up higher for them (which is when I spied the muscids). I have a theory that the muscids were higher up so that if/when the sun broke through - as it did for all of about six minutes - they are well positioned to catch that warmth and grab some rays. I think the craneflies are more concerned about getting out of the wind, staying hidden and waiting for nightfall when they become active. I don't have any real ideas as to what Sciapus was doing. Maybe they were just sheltering down low, they are delicate wee things after all. 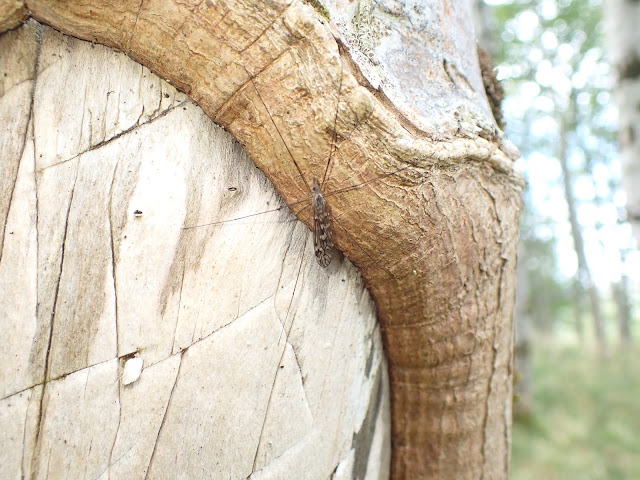 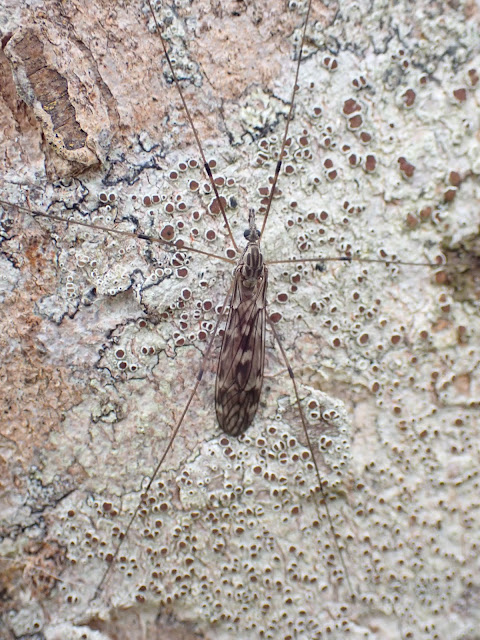 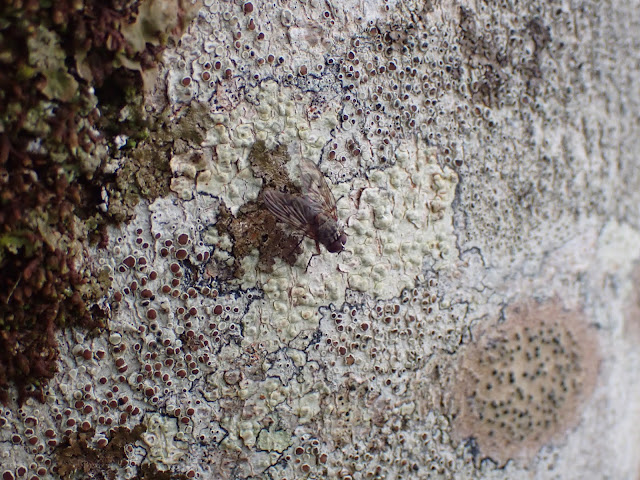 Of course, there was more to the tree trunks than flies and the occasional spider. 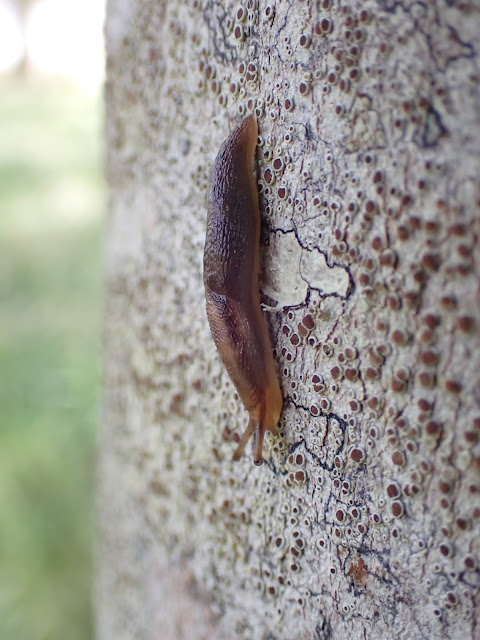 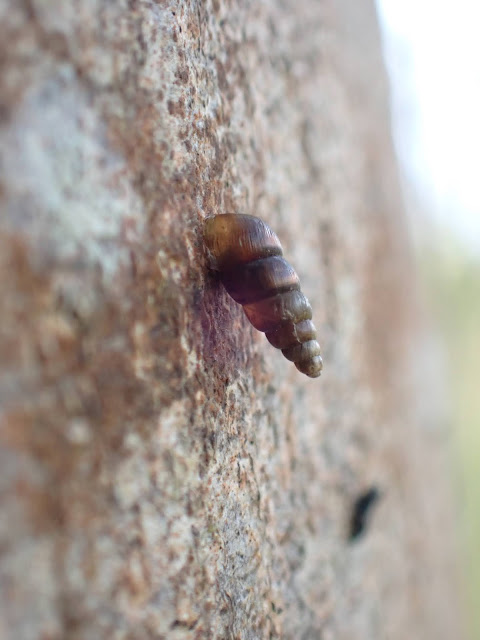 There are also a good number of lichens, mosses and liverwort species in all of these pics. But that's one for another time. The above pic has what is probably Ulota crispa and Frullania dilatata overgrowing various crustose lichens, of which Lecanora is the dominant genus. As I say, one for another time...

One for the Cambridgeshire Beetler hisself...